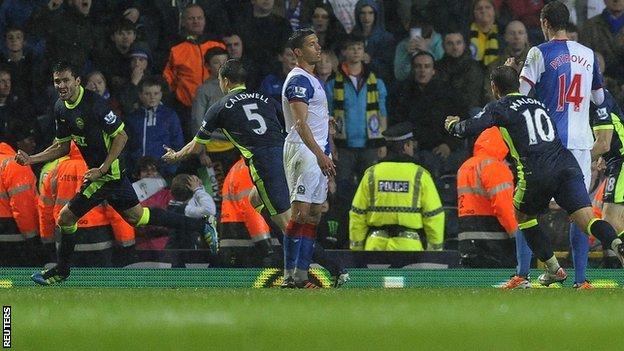 Blackburn have been relegated to the Championship after losing at home to Wigan, whose Premier League status is secure for next season.

Antolin Alcaraz headed the Latics to victory from a corner late on a rainy and rancorous night at Ewood Park.

Only a win would have given Rovers a chance of avoiding the drop but they were sloppy and shot-shy.

"When Venky's bought into Blackburn, the mission statement was to preserve and build on Jack Walker's legacy. It has been squandered to such an extent that relegation may not be the end of that downward spiral."

The visitors were lively in the first half, less so in the second, but took their chance to claim a decisive win.

It is a remarkable sixth victory in eight games for the Latics and leaves them five points clear of the relegation zone with one game left to play.

The result brings about a disastrous conclusion to what has been a turbulent season for Blackburn and their manager Steve Kean and an end to their 11-year stay in the Premier League.

The Scot has regularly been the focal point for abuse from frustrated Rovers fans, unhappy with his management and the way the club is being run by the owners, Indian poultry firm Venky's.

This continued on Monday in the form of mass chanting throughout, a lone fan invading the pitch at the start of the second half and, presumably, the reason why a chicken draped in a Blackburn flag appeared in the Wigan box five minutes into the game and had to be caught by Latics goalkeeper Ali Al-Habsi.

The goal four minutes from time heightened calls for Kean's sacking and the exit of Venky's, which only increased when the final whistle blew to confirm Rovers' fate.

Venky's looked set to be rewarded for sticking with Kean when he led them six points clear of the drop zone following a win over Sunderland on 20 March, but a disastrous run of seven defeats in eight games since then has cost the club.

Their performance here was meek as they limped out of the division. It was only in the second half that they had any attacking impetus and even then this was only intermittently.

Yakubu, who has been one of very few redeeming features of Blackburn's season, had a close-range volley blocked on the line and Junior Hoilett, their other shining light, was clearly caught by a swinging boot Emmerson Boyce, but when referee Mark Clattenburg waved away the penalty appeals, Rovers hopes were dented.

Blackburn are the only former Premier League champions that have been relegated. They have suffered this fate twice. In 1999, they made the descent to the second tier, where they stayed for two seasons before winning promotion back to the top flight in 2000-2001.

Blackburn's plight has been compounded by the form of Wigan, who were rock bottom when Rovers beat Sunderland but, in stark contrast to Kean's side, have been in scintillating form since late March, including hugely impressive victories over Manchester United, Arsenal and Newcastle.

The Latics' success is testimony to their manager Roberto Martinez, who has stuck to his passing principles, and owner Dave Whelan, who remained loyal to the Spaniard despite the threat of relegation.

The visitors were sharp throughout, zipping passes neatly around the increasingly wet surface and always looked the more likely to score.

Franco di Santo fired a good chance over, Victor Moses fluffed an even better chance from close range when he misjudged a header from Boyce's cross and Shaun Maloney spurned a header of his own from the same supplier.

In the end, though, none of these mattered as Alcaraz rose highest at the back post to power a header in from a corner to confirm his side's safety and send Rovers spinning into the second tier.