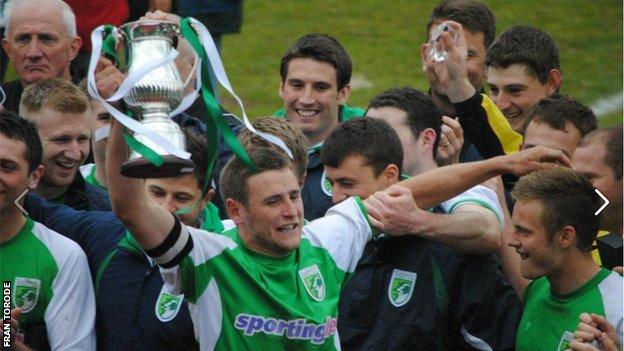 Guernsey ended their first season in an English league on a high by beating Spelthorne Sports 2-0 in the Combined Counties League Division One.

Ollie McKenzie slotted home a 21st-minute penalty for the champions after Dominic Heaume was fouled in the box.

Dave Rihoy made it 2-0 three minutes later as Guernsey celebrated getting the league trophy in front of more than 1,100 fans at Footes Lane.

"It's nice to finally get the trophy," manager Tony Vance told BBC Guernsey.

And Vance said winning the title capped off a tremendous first season for the club.

"It was a huge risk, if that's the right word, and people have backed us," he said.

"The crowds have come and it's been amazing. Next week we go to the cup final with 400-odd Guernsey people there and that's going to be incredible.

"The community have really backed us and this is what this team's all about.

"It's about giving people opportunities, not only the team we've got here, but also the kids who aspire to be in the team and that's what it's all about."