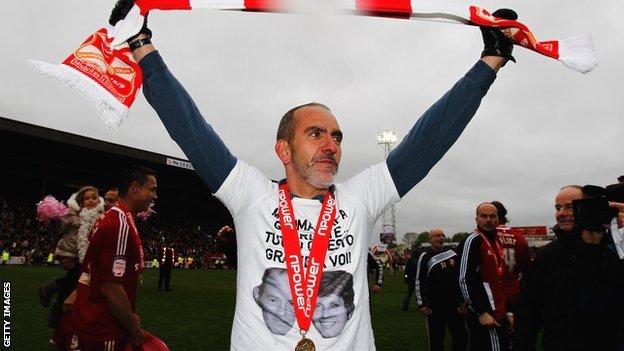 Swindon Town chairman Jeremy Wray believes he has been vindicated in his decision to hand Paolo di Canio his first job in management.

"I knew there was a catalyst there and that he could make a real change."

Although Swindon were early favourites to make an immediate return to League One, they made a stuttering start to their campaign, winning just one of their opening five games.

And with the media's focus pulled on the flamboyant Italian, Di Canio's credentials were questioned because his erratic behaviour, which included a public bust-up with on-loan striker Leon Clarke and being sent to the stands in the local derby defeat by Oxford.

But Wray insists: "I didn't have any doubt that we'd pull out of that patch.

"We knew we weren't fully prepared at the start of the season but I've watched this manager and this team grow up together and I had no doubt they'd turn it around.

"I knew there were people out there saying 'I told you so' after only a few days but I'm secretly chuffed I can turn around to two or three people and make a sign I shouldn't make at them.

"He writes his own script. He's everything we hoped he would be."

Di Canio committed to a two-year deal - with the option of a third - upon his arrival last May, but his success in Wiltshire has caught the eye of other clubs higher up the Football League food chain.

Most recently he had been linked with a return to West Ham, where he had his most fruitful spell as a player, and a section of Hammers fans were heard chanting his name in their 2-1 win over Hull on Saturday.

"The West Ham game was on [at the County Ground] and I insisted that the volume was turned down as they were singing his name," added Wray.

"They've got their own agenda and I genuinely don't believe he's going there. He's got unfinished business here.

"Loyalty is a two-way thing with him. As long as we show him the same loyalty he's shown us then he's going to be here next season, undoubtedly."