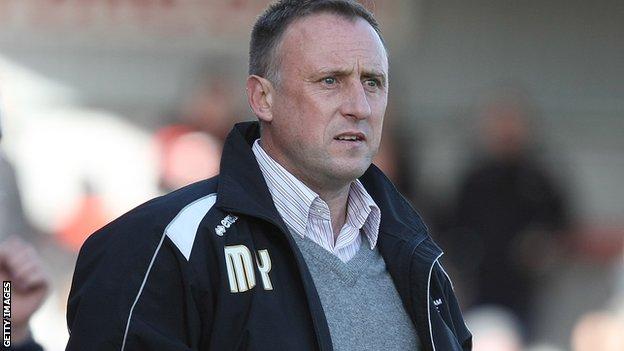 Cheltenham boss Mark Yates said he always believed his side would reach the League two play-offs despite a disappointing run in March.

The Robins were top in January but failed to win a game in March and were fighting to stay in the top seven.

But victory over Bradford on Saturday guaranteed them a place in the play-off semi-finals.

"We've got total belief in the players and we knew it would turn," Yates told BBC Gloucestershire.

"We're seven points off the top three and we didn't win in March - that sums up our campaign."

Crewe will need to beat Aldershot by seven clear goals next weekend in order to leap-frog sixth-place Cheltenham in the standings.

If the table remains the same, the Robins will face Southend in the semi-finals.

They face Plymouth away in their final game of the regular season, but Yates' concentration is now firmly on the play-off games to come.

"We're ready to have a really good go at it," he added.

"The first part of our job is achieved. Now it's a case of having a good week this week, we'll make a couple of changes on Saturday and then really get back down to it the following week.