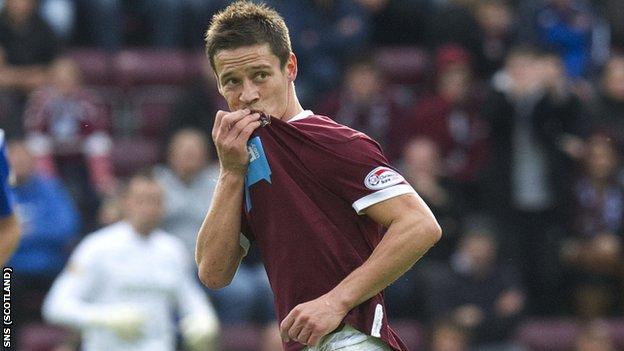 First-team coach Gary Locke has paid tribute to the role Ian Black has played for Hearts this season after it was announced the midfielder will leave Tynecastle in the summer.

The 27-year-old has been with Hearts since July 2009 but has not been offered a new contract.

"He has been outstanding this season, probably close to being the club's player of the year, said Locke.

"It was a matter between Blacky and the board of directors."

Scottish Cup finalists Hearts confirmed on Sunday night that they would not be taking up their option to retain Black, who joined them from Inverness.

"He has had discussions with the board and they've come to agreement that he's going to move at the end of the season," added Locke.

"From a personal point of view and talking on behalf of Paulo (Sergio, the manager) and the backroom staff, he's been fantastic for us.

"If we (the coaching staff) wanted to keep him or not, if he says he wants to play somewhere else we wish him all the best.

"He's a fantastic lad and a fantastic professional and he's played a huge part in the success we've had this season."

Rudi Skacel and Craig Beattie are out of contract at the end of the season and could also follow as Hearts seek to reduce their wage bill.

"Everybody knows the club is looking to cut costs and by doing that we'll have to try to offload players," continued Locke.

"We've got a lot of players here and the club spends a lot of money every month on salaries. It's something we're looking to reduce."