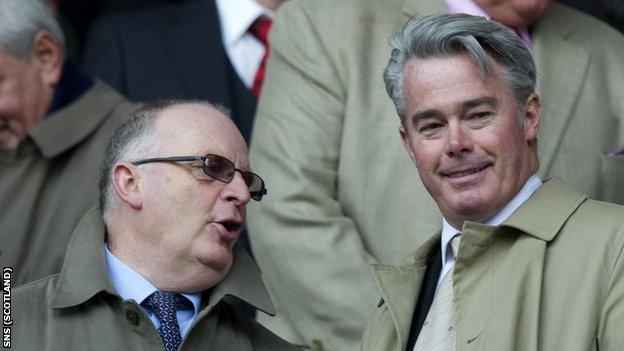 Brian Kennedy and the Blue Knights consortium have submitted a revised offer for Rangers.

Administrators had told the group that their earlier bid did not match the one submitted by American Bill Miller.

Kennedy told BBC Scotland: "We've been in extensive negotiations with the administrator over the weekend in a bid to provide a deliverable offer that is acceptable."

Rangers have been in administration since 14 February.

Having had an offer of his own rejected, Sale Sharks owner Kennedy has joined forces with the Blue Knights' attempts to rival Miller's bid.

American trucking tycoon Miller is seeking assurances from Scotland's football authorities that Rangers will face no further sanctions ahead of next season, with the Ibrox club having already incurred a 10-point Scottish Premier League penalty for going into administration.

Both bids are subject to conditions with the Blue Knights seeking a Company Voluntary Agreement (CVA) with creditors, and Miller's offer depending on the outcome of further potential sanctions from the football authorities.

The Knights also want club owner Craig Whyte to hand over his 85% shareholding.

Rangers' administrators have launched an appeal against a £160,000 fine and 12-month transfer embargo imposed on the club by the Scottish Football Association.

SPL clubs met at Hampden on Monday to discuss financial fair play proposals, which could have a significant impact on the Ibrox club, but have delayed voting on the subject for at least a week.

The impasse over whether to introduce tough new rules for clubs who are in administration or face the prospect of liquidation would appear to muddy the waters yet further in terms of Rangers finding a buyer.

Rangers supporters marched to the national stadium at the weekend in protest at the SFA sanctions.