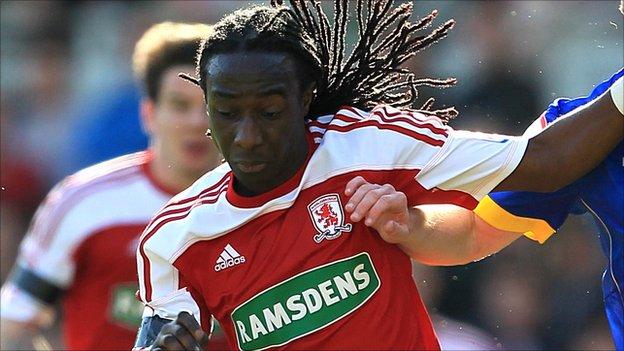 Middlesbrough manager Tony Mowbray will not be forced to sell the club's star players despite Boro failing to reach the Championship play-offs.

Defeat at Watford on Saturday ended Boro's hopes of finishing in the top six, placing the future of players such as Marvin Emnes in doubt.

"I don't think supporters have to fear everyone will be sold, because they won't," Mowbray told BBC Tees.

"We are in a position where anyone we want to keep, we keep."

Mowbray continued: "We don't have to fight off any bids for players, if we want to keep them we keep them, but there will be some players we feel we can utilise the funds from through salary or sale."

Although the future of several players remains in the balance, Mowbray will definitely be without Barry Robson, who leaves for Canadian side Vancouver Whitecaps this summer.

But, with Lukas Jutkiewicz the only player Boro paid a transfer fee for last season, Mowbray hopes to strengthen his squad.

"We have to do some wheeling and dealing, we have to find some new players that can impact on the team," he said.

"Yet we have to keep the core of the team that showed they can compete at the top end of the Championship.

"There's a few players who will want to know their future, out-of-contract players will have a concern, and those under contract will also want to know what my thoughts are.

"It's a time to wrap up proceedings for the year, give the players a feeling of what we think and then the players can look after themselves over the summer."