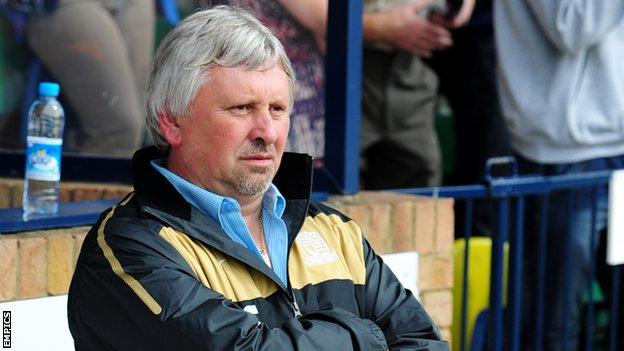 Southend United boss Paul Sturrock has said December's postponed fixture at Aldershot could prove decisive if his side fail to earn automatic promotion.

The Shrimpers led 1-0 against the 10-men Shots before a half-time floodlight failure caused it to be called off.

Aldershot won the rescheduled tie and Southend are now a point off the top three in League One.

"I'd hate to think that will be one to come back and bite us on the bum," Sturrock told BBC Essex.

"It's been a scary season. But the players have found a way of getting through.

"We're going to have to show our mettle and we've got the momentum for the play-offs. But we'll see what next week brings."

Following Saturday's 2-0 win at Oxford, Southend enter the final round of games in fifth place, a point behind Torquay and Crawley, who occupy the final automatic promotion berth on goal difference.

Sturrock's men will have to better both side's results at the weekend when they face relegated and managerless Macclesfield, otherwise they will have to settle for the play-offs.

But Sturrock knows that their less than consistent form since the end of November could be equally as costly as the abandoned game against Aldershot.

"The fat lady still hasn't sung yet," he said.

"So we go into the last game of the season with something to play for.

"I was delighted with the attitude of the players. I'm just gutted that one of these games we should have won and didn't might cost us dear."

And the Scot was able to reserve praise for defender Bilel Mohsni - playing in a wide midfield role - whose goal against the U's was his fourth in two games after almost leaving the club over disciplinary issues.

"In the air he's unbelievable. He's clearing headers in our box, next minute he nearly scores at the back post the other end," he said.

"He's an incredible, incredible footballer. At this moment he is towing the line and I'm very pleased."