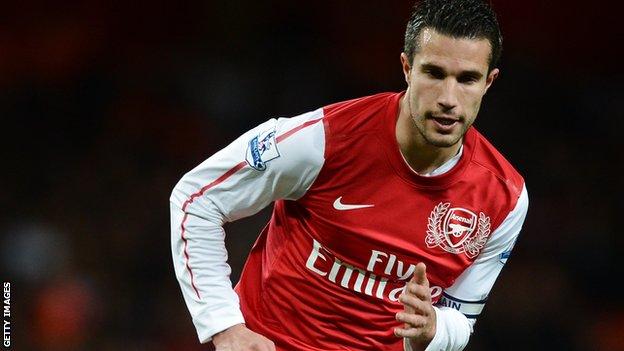 Arsenal manager Arsene Wenger wants Robin van Persie to "push us over the line" in his side's pursuit of a place in the Champions League.

The Dutch striker is this season's leading scorer in the Premier League, having found the net 28 times so far.

"He has to push us over the line," said Wenger. "There are two games to go. We have been a bit over-reliant on him, I concede that.

"But it is difficult to change that before the end of the season."

Van Persie's most recent goal helped Arsenal to secure a point against Stoke City on Saturday, a result that puts them four points clear in third place.

Spurs, Newcastle and Chelsea all have a game in hand over Arsenal as the four clubs vie for a Champions League spot.

Wenger was pleased with his side's display at the Britannia Stadium, which kept them ahead of the chasing pack.

"It was a valuable point because we showed battling qualities we have not always shown here," he added.