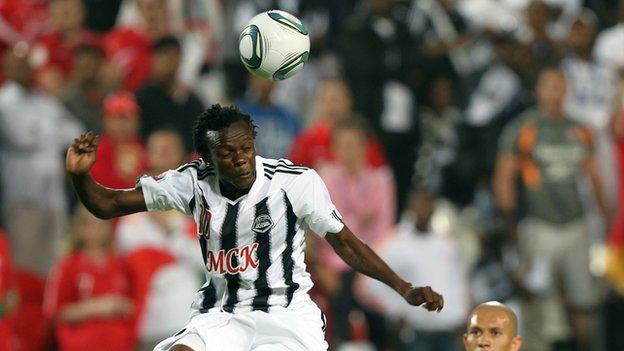 Former African champions TP Mazembe of DR Congo are confident of making it to the group phase of this year's tournament.

The Lubumbashi-based side beat Sudan's El Merreikh 2-0 at home in the first leg of their round of 16 tie on Sunday.

And striker Given Singuluma has told the BBC his side can get the result they need in Sudan in two weeks' time.

"When we play in Sudan we will be able to score, even away from home," the Zambian international said.

"In Sudan we only need to score [to go through to the last eight] - I know my team, we can score one or even two goals."

Mazembe are making their return to the competition after a year on the sidelines, following a ban for fielding an ineligible player.

The team have looked impressive so far in the tournament and have high hopes of going a long way.

But first they have to complete the job over Merreikh, and Singuluma says they are ready to do that.

"We didn't want to concede a goal and we managed that," he said.

"When we go to Sudan we won't have any pressure, they (Merreikh) will have the pressure."

The second legs of the round-of-16 ties take place over the weekend of 11-13 May.