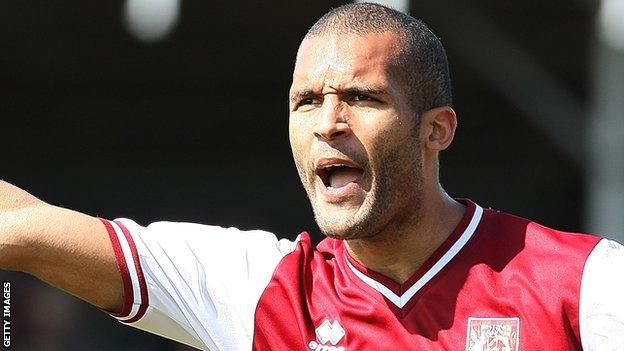 Northampton Town captain Clarke Carlisle says he wants to stay at the club if a deal can be arranged.

The 32-year-old has made 17 appearances since joining the League Two club on loan from Burnley but is out of contract this summer.

He told BBC Northampton: "The gaffer and I will sit down and talk and if we can make it work, we will, because I've had a phenomenal time.

"[The loan move] has stoked the fire in the old dog and I'm very appreciative."

"He knows how to drag the best out of a player. He knows when to put his arm around them, he knows when to encourage and when to chastise. He's got the balance perfect.

"He's a meticulous man. That's a sign of an outstanding manager and it's been a pleasure to come and work with him again."

The Cobblers have one match remaining in their league campaign, against Rotherham, Following Saturday's 1-1 draw with Gillingham at Sixfields.

"It was an OK result. I thought we could've done more. It's just annoying because we have enough to comfortably see out games like that," said Carlisle.

"But it shows just how far we've come and how much we've got to build on. I'm really looking forward to next season."