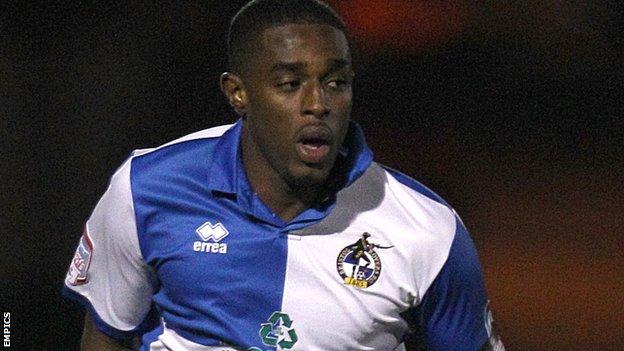 Winger Mustapha Carayol has entered talks with Bristol Rovers about extending his contract at the club.

The 22-year-old arrived at the Memorial Stadium for an undisclosed fee from Lincoln last summer and still has a year left to run on his current deal.

But Rovers manager Mark McGhee confirmed to BBC Radio Bristol that he is keen to keep hold of the winger: "We're talking to him about extending.

"We're in control of the situation. I'm determined to try and keep Muzzy here."

Carayol started his career at MK Dons before spells with Crawley, Torquay, Kettering and the Imps.

He has been a key figure in McGhee's line-up since the Scot's arrival in January and speaking after Rovers' 5-1 win over Accrington on Saturday, McGhee added: "When he's in the mood he was in today he's unplayable.

"He was linking, going past people, defending and providing crosses for goals. The only thing he didn't do was score himself.

"I'm hopeful he'll be out there on a new pitch on the first day of next season, tearing up defences like he has been."