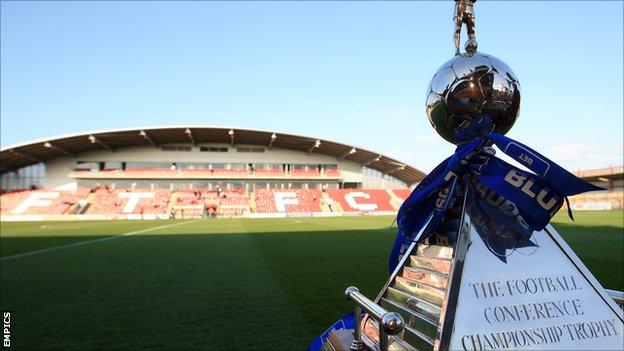 "League seasons are won over 46 games and we probably ran out of steam towards the end," the Fleetwood boss told BBC Radio Lancashire.

Fleetwood bounced back from defeat in the play-offs last season to win the title by five points from Wrexham.

Mellon's side scored 102 goals and collected 103 points from their 46 league matches.

"We dusted ourselves down and got on with things, whereas a lot of other clubs would have taken that as a big hit," said Mellon of the club's failure a year ago.

"We were determined that we were going to recover and learn from it."

Chairman Andy Pilley, who has invested heavily into the team and facilities at Fleetwood's Highbury Stadium, added: "I'm so proud because I don't think many people get their dreams come true.

"My dream has come true because I'm now the chairman of a Football League club.

"This is such a shot in the arm for the whole area. Fleetwood Town is a Football League club, that's the way it will remain and hopefully we can progress.

"It's not going to be easy, but we're committed to progression and we'll give it our very best."