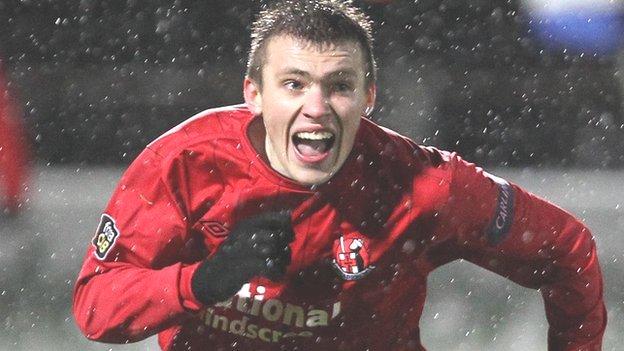 Stuart Dallas has two games left in his Crusaders career but they just happen to be two of the biggest in his life.

The 21-year-old will face Linfield in Saturday's Irish Cup final before a Setanta Cup decider against Derry City.

It is the stuff of dreams for the winger who was playing for little Coagh United in the Championship two years ago.

The fairytale continued as he made his Northern Ireland debut and Dallas will take another step up the football ladder when he joins League One side Brentford this summer.

"It has been a really amazing couple of years and from a young age I have dreamed of being a professional footballer," said the Cookstown man.

"Even when I was playing with Coagh I believed it was possible and after a great time with Crusaders I've got the chance with Brentford.

"I've been over to the club in London and they have fantastic facilties, while Griffen Park is a compact ground just like Seaview.

"I know this is a big challenge for me but I have belief in my ability - if I didn't I would not have accepted the move."

The big break for Dallas came when Coagh played the Crues in an Irish Cup tie, with his performance impressing Seaview boss Stephen Baxter.

Baxter registered his interest and Dallas was to shine after moving to the north Belfast club.

He quickly became a menace for Premiership defences and his blistering pace and eye for goal secured a Northern Ireland debut against Wales in the Nations Cup.

The League Cup is already in the bag this season and Dallas could leave for England as a treble winner.

"Stephen spoke to me after the Irish Cup game about going to Crusaders and I have to thank him for giving me that opportunity," added Dallas

"Crusaders is a special club - the management team, committee and fans give it a family feel.

"I play alongside a great bunch of lads and I'm not surprised by our progress as the team is packed with quality players.

"We might be a small club but it's an ambitious club and there is a determination to win more silverware."

The Crues have showed both class and desire in their runs to the Irish Cup and Setanta deciders.

A 2-0 quarter-final win over a strong Coleraine side at their Showgrounds home was the stand-out result in the Irish Cup.

The upsets have come in the Setanta Cup, first with a 2-0 victory against Bohemians in the quarter-final second leg at Dalymount Park.

Crusaders were the only Irish League representatives in the semi-finals and they now faced Airtricity League pacesetters Sligo Rovers.

The tie was level at 2-2 after 180 minutes before skipper Colin Coates won it with an extra-time penalty.

That set up a 12 May final against Derry but the focus now is solely on Saturday's showdown with the Blues at Windsor Park.

Linfield are chasing a sixth league and cup double in seven seasons and David Jeffrey's side beat the Crues 2-1 in last year's final.

"We know we are underdogs but that suits us just fine," said Dallas.

"We weren't fancied to beat Bohemians or Sligo Rovers yet we showed that we can be a match for anyone.

"Linfield are champions for a reason and while we respect them, we do not fear them and there is added incentive from losing the final to them last season.

"There's a great buzz in the squad and we will go to Windsor with confidence and a real belief we are good enough to win.

"Victory on Saturday would be incredible and to then complete a cup treble in the Setanta, well that would be the perfect goodbye to Crusaders."