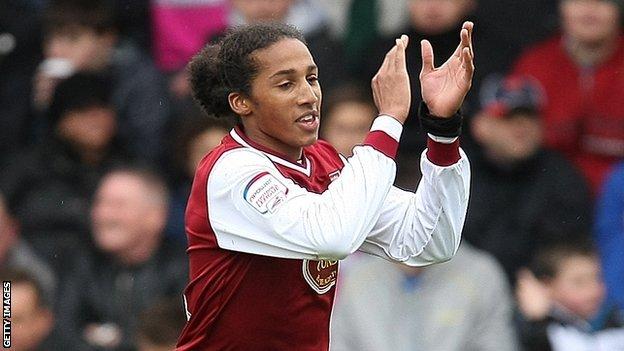 Northampton Town's Lewis Wilson has signed a one-year deal with the club.

The 19-year-old striker joined the club in January from United Counties League side Newport Pagnell. He scored on his full debut against Gillingham.

"He wants to practice and get better. He's a very hard worker and he has a knack of scoring a goal."

Speaking after the draw with the Gills, Wilson said: "I'm over the moon with my first game.

"Obviously, I could have had a few more goals, but I'm glad to get that one and hopefully it continues for a long time.

"He has caught the eye of manager Aidy Boothroyd since January and scoring on his full debut did his contract cause no harm.

"The year-long deal is his big chance and given his age and background it should not dent the Cobblers budget too much."

"Scoring was unbelievable. I didn't actually know what to do and I didn't even celebrate, I don't think.

"The manager keeps telling me to play how I'm playing, to keep working hard and keep getting at defenders and giving them no time."

Wilson was previously with the Rushden & Diamonds youth team, and spent time on work experience at Northampton Spencer prior to his move to another local team, Newport Pagnell.

"I'm delighted for him," added Boothroyd. "His speed and endurance will improve with full-time training.

"With a good summer under his belt and some good training - which they all need - it'll get him ready for pre-season and we'll see if he can kick on."