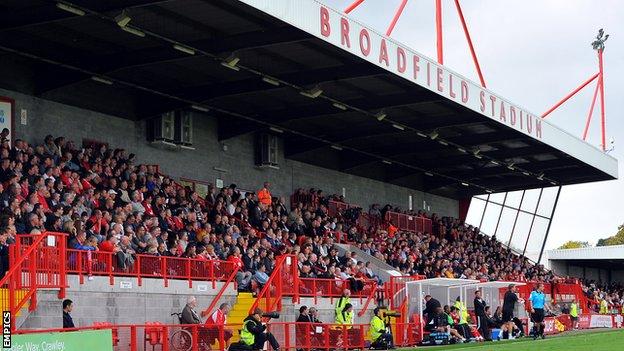 Crawley Town co-owner Susan Carter insists it will not be the "end of the world" if they fail to clinch automatic promotion from League Two.

They have to win at Accrington Stanley to be certain of pipping Torquay and Southend to third place.

Carter told BBC Surrey: "We're all nervous. There's no 'get out of jail' card after this week.

"Nobody will be more disappointed than me if we don't win. But would it be the end of the world? No, it wouldn't."

She admitted the team had "let it slip" last weekend when they lost 3-0 at home to Hereford.

But a place in the play-offs she said: "We've done extremely well and it has been an amazing season."

Carter admits that much of their planning for next season, including discussions over the futures of caretaker manager Craig Brewster and director of football Steve Coppell, depend on what division the Sussex side will be in.

"A lot of decisions have to be made for next season and we as a club can't make them (yet)," she added.

"We'll have a meeting once we know if we are going to be in League One or League Two.

"It would have been nice to have it in the bag so we could have made plans but we'll have to put things on the back burner until we know which way we are going."