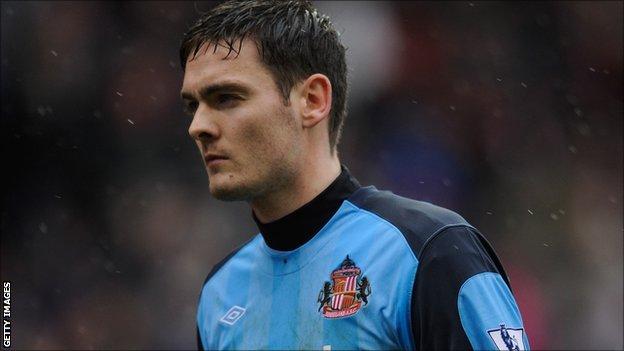 Sunderland defender Michael Turner has said he and his teammates were delighted to see Craig Gordon back in the first-team after a lengthy absence.

The 29-year-old goalkeeper started the Black Cats' 2-2 draw with Bolton on Saturday, his first appearance since a 2-1 loss to Tottenham in February 2011.

"He's had 15 months since he last played, so well done to him for getting back playing, he's had a tough ride."

Gordon, who suffered a string of injuries including ankle, forearm and knee problems, has been kept out of the first-team picture by the form of Simon Mignolet and Keiran Westwood.

However with the former Hearts custodian out of contract in the summer, boss Martin O'Neill has handed him an opportunity to impress with Premier League safety assured.

Turner added: "It's always tough when you've been out for months on end.

"I'm sure he'll be pleased with how it went for him."

Despite making an incident-free return to first-team action, the Scotland international was denied a clean sheet by a brace for Bolton's Kevin Davies.

The 35-year-old centre-forward caused problems for Turner and his defensive colleagues throughout the afternoon, highlighting why he was a January transfer target for O'Neill.

"He always pulls onto the far post when crosses come in," Turner added.

"If the ball is hung up in the air, and he's breathing down your neck, it's going to be a tough ball to deal with.

"He's made a career out of hanging at the back stick and he's done it twice to hurt us."