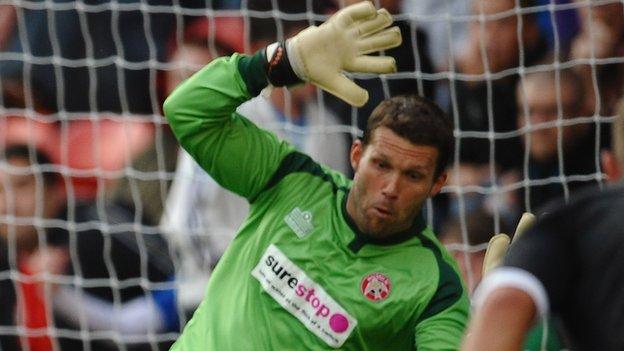 Veteran Walsall keeper James Walker hopes to carry on playing for the Saddlers next season - as long as he feels happy that he can contribute.

But 38-year-old Walker must still talk to boss Dean Smith over a new deal.

"No decision yet," he said. "I'll speak to the gaffer to see what's happening."

We've got to move it on now and get better for next season, when it really will be known as Dean Smith's team

Walker told BBC WM: "As long as I'm feeling fit and am enjoying it, I still feel I can do the job and contribute.

"Then I'll definitely be here next season, if he gives me a contract."

Walker received a great reception from the Saddlers fans following Saturday's season-closing 1-0 win at MK Dons, suggesting that it might possibly have been his last game for the club.

But 38 is not an uncommon age for a keeper, given the example of Peter Shilton, Pat Jennings and Dino Zoff, who played in a World Cup final at the age of 40.

"I've been privileged enough to do the job for a few years," admits Walker. "But I was talking the other day to Mick Kearns, our former keeper, and he pointed out that you're a long time retired.

"The fans were fantastic on Saturday but then they've been superb to me from the first moment I came into the team more years ago than I would care to admit."

The departure of 34-year-old former Republic of Ireland international Macken, who hit 21 goals in 76 games in his two seasons at Bescot, is the most surprising.

Adam Chambers has an option to exercise his right for a new contract, while a decision is still expected on Ryan Jarvis.

"I'll sit down with the chairman and the board and discuss possible options in terms of recruitment," Smith told BBC WM.

"A couple of months ago we were falling like a stone but we had an injection of some players coming in on loan and they've done fantastically well and turned it round.

"But we want to do better than that. We've got to move it on now and get better for next season, when it really will be known as Dean Smith's team."