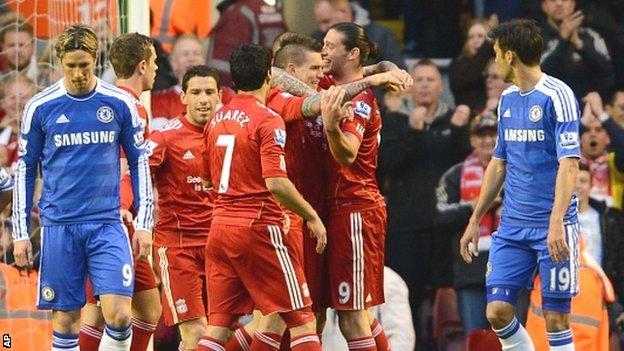 Liverpool gained revenge for Saturday's FA Cup final defeat with an emphatic win over a lacklustre Chelsea to end the Blues' hopes of a top-four finish.

Chelsea were sloppy throughout and fell behind when Michael Essien deflected Luis Suarez's cross into his own net.

Goals from Jordan Henderson and Daniel Agger made it 3-0 and Stewart Downing missed a penalty before half-time.

Ramires pulled a goal back but Ross Turnbull's error allowed Jonjo Shelvey to fire in and crown a superb display.

The only possible blot on the home side's copy book was an unnecessary incident involving the otherwise excellent Suarez, who caught Branislav Ivanovic in the face with his arm. Suarez was not booked by referee Kevin Friend and could face retrospective action.

However, in a game with a number of unsavoury incidents, Chelsea's Michael Essien was shown a yellow card for a nasty challenge on Andy Carroll, so will not face further punishment.

The result made a mockery of Liverpool's woeful home form this season, which had seen them win only six games, while they equalled their lowest home goals tally of 24 courtesy of the four they scored here.

The game could not have been more different from the cagey and dour contest these two sides served up on Saturday.

At Wembley, Chelsea were compact and efficient but here they were shambolic, especially in the first half, while Liverpool were completely transformed from the stuttering, shot-shy side that so underwhelmed the national stadium for an hour.

Granted, it was a much-changed Blues team, with regulars Ashley Cole, Juan Mata and Frank Lampard on the bench and goalkeeper Petr Cech and Didier Drogba omitted, in a clear indication that manager Roberto di Matteo believed the more realistic route to Champions League football next season is as a by-product of glory against Bayern Munich in the final in Munich on 19 May. This is now their only means of qualifying.

But this was no excuse for such sloppiness, particularly as the XI still contained eight internationals. Plus, arguably their worst performer was captain and defensive lynchpin John Terry, who was nutmegged three times in the first half and was partly responsible for the first two Liverpool goals.

Shortly after his defensive partner Branislav Ivanovic had struck the post with a header from a corner, the England international was easily beaten by Suarez as he jinked in down the right before his cut-back found the net via the sliding Essien.

Liverpool improved markedly on Saturday following the introduction of substitute Carroll, who scored their goal at Wembley and was inches away from an equaliser, and he played his part here from the start, no more so than in providing the return header from a corner which allowed Agger to nod in the third goal.

It could have been a worse half for the Blues had Downing not twice hit the woodwork, with a dipping 20-yard shot that clipped the bar and, less forgivably, when he struck the post with a penalty after Ivanovic had blocked Carroll with an elbow in the box.

Chelsea's former Liverpool striker Fernando Torres, who began the game, was subdued all night barring one moment when he cut around Agger with a superb touch and fired against the bar.

Di Matteo has done a superb job to salvage so much from the wreckage of predecessor Andre Villas-Boas's "project", but this was a lost cause, even when Ramires bundled in to reduce the arrears early in the second half.

If there were any Chelsea hopes of a fightback, they were ended on the hour when Turnbull's mis-hit clearance fell to Shelvey and he fired a 30-yard shot into the unguarded net.

A superb Pepe Reina save from substitute Romelu Lukaku's header denied Chelsea any further consolation, who will now switch their focus to the date with Bayern.