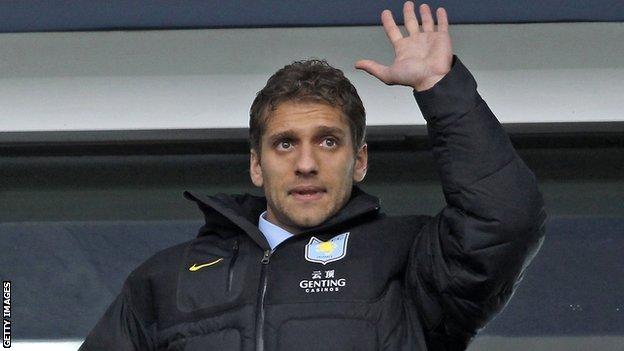 Aston Villa captain Stiliyan Petrov, who has been diagnosed with acute leukaemia, has been voted the club's players' player of the year.

Petrov did not attend the awards ceremony but sent an emotional video message.

"Sorry I can't be with you but I've got a little issue I need to fight," said the Bulgarian international.

We're right behind him. It was quite emotional to hear him on video

Petrov is undergoing treatment after being diagnosed with the illness last month.

The 32-year-old former Celtic midfielder has scored four goals in the Premier League this season and had been one of the most consistent performers in a disappointing campaign for Villa before his illness.

The West Midlands club is yet to secure Premier League survival, three points above the relegation zone with two games remaining.

"I hope you haven't given me this award because of my situation. I thought I had a quite OK season!" added Petrov in his message on Monday.

"It's been a difficult season for all of us - for the fans, for the players, for the manager, for the chairman, for everybody at Aston Villa Football Club.

"But I think everybody, every single player and everybody at this football club have worked so hard.

"This club is one of the best in the country and we've worked hard, so we all deserve this award because we battle together, we fight together and I just want to say thanks very much again."

Villa keeper Shay Given told the BBC that Petrov's words were "emotional".

"We're right behind him," said Given. "It was quite emotional to hear him on the video."