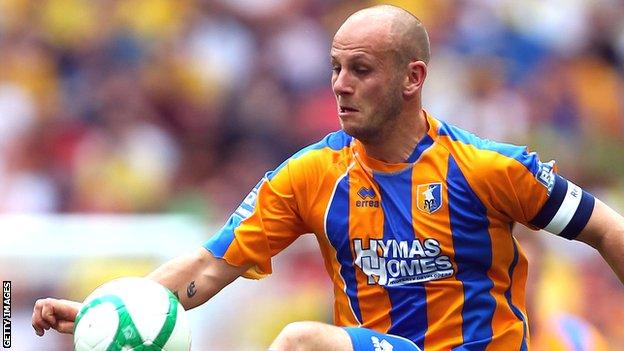 Mansfield Town captain Adam Murray says his side are not favourites to win promotion through the play-offs despite their magnificent end to the season.

The Stags won 13 of their last 15 matches to finish third in Blue Square Bet Premier table.

"It's nice to go into the play-offs on a good run, but we know that there's a really tough task coming up."

Murray was part of the Mansfield Town side that won promotion to League One in 2002.

"Apart from making me feel really old, it'd be brilliant [to be promoted again]," Murray added.

"That was the whole aim of why I came back here, to get this club back in the League. And whether it be this season or next, we're moving in the right direction."

Mansfield face York City in the play-off semi-finals, with the first leg at Bootham Crescent on Wednesday evening.

"Obviously you gain confidence with winning, and we're chuffed at what we've achieved this season," Murray said.

"They're a very strong outfit with a good manager, and they're very good at what they do.

"But it would be fantastic for me and if all goes well a very proud moment to lead the boys out at Wembley."