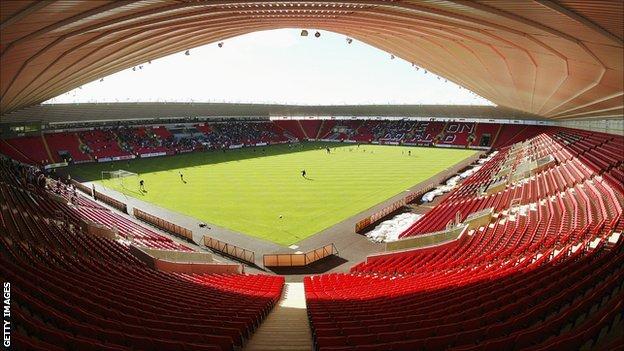 Darlington are set to leave their Arena home venue next season and are seeking a groundshare alternative.

The group hoping to take over the club, Darlington FC 1883 Ltd, have told the ground's owners that playing there is not part of their plans.

A spokesperson for The Arena's owners said: "We understand the focus of DFC 1883's plans have changed. Playing at The Arena is no longer viable."

Darlington are now likely to play outside the town for the near future.

If a suitable venue is not found, the club could be denied the opportunity to play in the Blue Square Bet North division, and forced to play further down the football pyramid.

The Quakers had been based at the venue since it was completed in 2003. However, they attract an average of only 2,203 fans to the 25,000-capacity stadium.

Even prior to the club's relegation from the Blue Square Bet Premier this season, the costs of running the stadium as an ongoing proposition were prohibitive under the budget.

Former chairman Raj Singh revealed to the BBC earlier this year that monthly costs for maintenance and bills amounted to £10,000 per month.

In addition the owners of the land, Graham Scott and Philip Sizer, were paid a £10,000 'peppercorn rent' for hire, as covenants imposed by the council after they funded the initial development restricted non-footballing use of the venue.

DFC 1883 hope to complete the purchase of the club, and have been in discussions with both Singh - the major creditor - and administrator Harvey Madden.

The plans are to secure a groundshare with another a club, with a longer-term view to return to the town when the opportunity comes available.