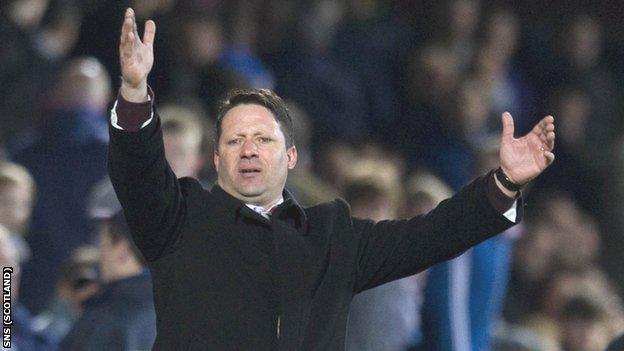 Paulo Sergio lamented his Hearts team's lack of clinical finishing in their 1-0 defeat by Motherwell at Tynecastle.

"We created two or three good chances in the first half and four or five in the second, but we weren't effective," said the Portuguese.

Michael Higdon's first-half goal for Motherwell pushed them to within touching distance of the third qualifying round of the Champions League, but for the home side it was a wasted chance to make a push up the table.

"The only save that our goalkeeper had to do in the game, they had a second ball and they scored a goal," said Sergio, referring to Jamie MacDonald's parry of Jamie Murphy's shot that landed at the feet of Motherwell striker Higdon.

"We defended poorly at that moment. We shouldn't give the inside to Murphy, but we made that mistake and they scored a goal to get three points.

"We should show more desire to get the points.

"There was a period after we lost the goal that I didn't like the spirit of the team.

"What can I say? Congratulations to Motherwell, but I am disappointed with the result."

Sergio is unsure whether he will still be working in Edinburgh next season.

It is possible that he could leave after two more Scottish Premier League matches and the Scottish Cup final against Hibernian on 19 May.

"We will see," he said of his future plans.

"People show that they want me to stay, talking about it. Let's see when we sit down and see if that is going to be possible.

"I love the club, I love the city, it is a fantastic country, Scotland, so we will see at the right moment.

"It is not me who will decide that timing. It's not my step.

"I'm in football more than 30 years, so football has no surprises for me.

"Football is almost the same all over the world - the problems, the joy, the hard moments.

"I say that to my players - in football you never should be thinking about tomorrow and forgetting about today. Today is the most important thing."

Hearts announced on Monday that influential midfielder Ian Black will be leaving the club at the end of the season after three years' service.

"But, if I was Hearts manager, I would like to have Blackie. He is a very good player.

"But the club says they cannot afford a wage like that."