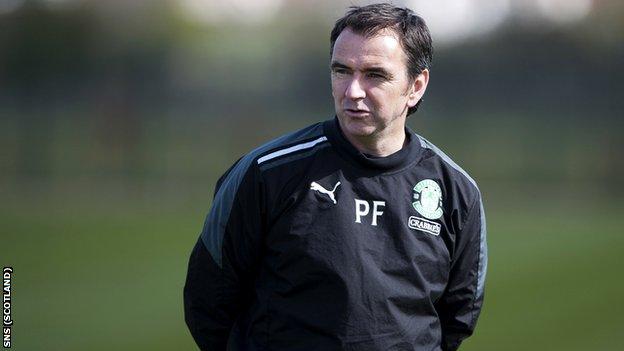 Pat Fenlon thinks recent criticism of his side is unwarranted and claims many in Scottish football are enjoying seeing Hibs in danger of relegation.

"I think people are happy Hibs are in trouble," said the Easter Road manager.

"There's definitely a perception out there that a lot of people want to see Hibs in trouble for some reason, I don't know why.

"Our last two performances have been very, very good. We just didn't get the rub of the green."

Dunfermline have claimed four points from their last two games, scoring seven goals in the process, and they take on Inverness while Hibs are at Pittodrie.

The relegation rivals then meet at Easter Road on Monday in what is the penultimate match of the season.

"We've just got to win our own games, it's still in our own hands," added Fenlon. "We win our next two matches, we're safe. Simple as that.

"I'm not nervous, I'm looking forward to them.

It could either be a really fantastic season and everyone forgets what's gone on previously, or it could be a disaster

"The confidence is okay. It's just a matter of making sure they keep believing in what we're doing and eventually some of those chances will go in for us."

Fenlon said he would not be keeping track of the score at the Caledonian Stadium.

"I'm sure enough people will be keeping an eye on that," the Irishman explained. "I'll try to keep my eye on the job on the pitch.

"If we can win the game it doesn't really matter what happens anywhere else. If we win it we go into the game against Dunfermline in the driving seat.

"We've just got to make sure we stay in that driving seat."

Fenlon replaced Colin Calderwood in November, with Hibs having taken 14 points from 15 matches and occupying ninth place in the Scottish Premier League.

In the 20 league matches that have followed Fenlon has managed to gain just 13 more points, although he has steered the team to the Scottish Cup final.

"The minute we went seven points clear I said one result changes that," he continued.

"What I've also said is we need to get over the line, by hook or by crook.

"I've never once said it's all over."

With three matches to determine his side's SPL status and the Scottish Cup final with Hearts to look forward to, Fenlon knows his first season will be defined in the next few weeks.

"I expected it to be a tough job and it hasn't let me down in that regard," he said.

"It could either be a really fantastic season and everyone forgets what's gone on previously, or it could be a disaster.

"That's what football's about. That's why we all love it and want to be involved."