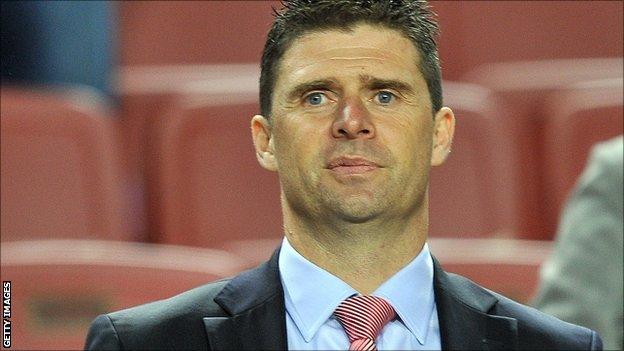 The chief executive role at the Etihad Stadium has been vacant since Garry Cook resigned in September.

Quinn spent more than five years as chairman of Sunderland.

But the 45-year-old told BBC Radio Manchester: "What they need is someone who can travel the world and make Manchester City as big as, or certainly challenging with, the big clubs."

The former Republic of Ireland international left Sunderland in February, having spent his last four months at the club as director of international development.

Speaking to Blue Tuesday, he added that it is unlikely he will take a similar position to those he held at the Stadium of Light with any club.

"Sunderland is the only club I've done more than play for," said Quinn, who scored 78 goals in six years as a City player.

"The club was in pretty bad shape when I went in there so I felt as if I had to do it.

"It wasn't a chosen career path, it arrived at me. I got stuck in and did it.

"It can be unforgiving and pretty thankless at times because you can have a great week off the pitch, and then something goes wrong on a Saturday, you get well beaten, and the confidence in you has waned.

He added: "I had six great years at Sunderland doing that but it was a natural end for me. I'm not quite sure what the next step is."

to return to the top of the Premier League table and if they win their remaining two matches will become champions for the first time since 1968.