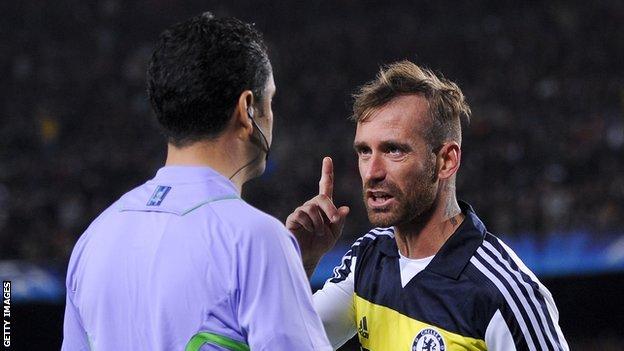 The Champions League's yellow cards rules will not change for at least three years, Uefa has confirmed.

after six were cautioned in the semi-finals.

The rules are different for Euro 2012 when Uefa will wipe the slate clean for yellow cards after the quarter-finals.

A Uefa spokesman said: "Different rules can apply in different competitions. The rules are a result of careful, democratic procedure."

International players' union FIFPro had made a plea for the six players who are suspended to be allowed to play, which was rejected.

Chelsea's captain John Terry will also be suspended after being sent off against Barcelona in the semi-final second leg at the Nou Camp.

Michael van Praag, head of Uefa's Champions League Rules group, was quoted on FIFPro's website saying: "We have just had three sessions with representatives of the European Clubs' Association and others, in which we confirmed the rule for the coming three years.

"We did not receive any request whatsoever concerning the yellow card rule, not even from the representative of Bayern Munich. And so we will be continuing the rule for the next three years."

Before that announcement, Simon Barker - a spokesman for FIFPro - had said: "Anybody committing a serious offence in the semi-final should be awarded a red card and miss the final, but the offences that result in a yellow card do not justify the serious punishment of missing the match of your life.

"Some people say this will give players the licence to kick all and sundry during the semi-final, but that is utter nonsense.

"Any serious offence will result in a red card and that still means exclusion from the final."

At Euro 2012, only players sent off in the quarter-final or semi-final will be banned from the final in Kiev.