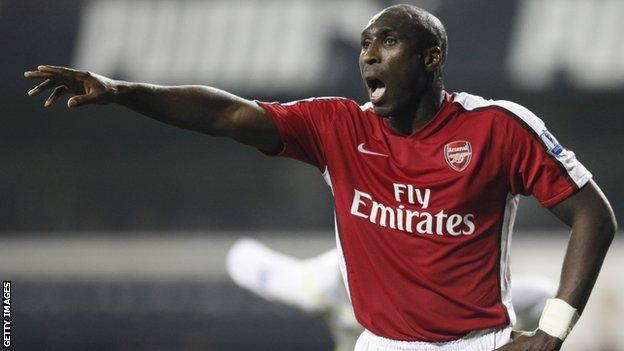 Former England centre-back Sol Campbell has announced his retirement from football after two decades in the game.

The 37-year-old former Arsenal player has been without a club since being released by Newcastle United in 2011.

The defender, who made his debut for Spurs in 1992, told Sky Sports News it was "hard to let go, especially when you have been a top sportsman".

"It's not easy for me to say it's all over, that's why I've been putting it off for a long time," he said.

The veteran said he had been given the chance to carry on but, following an injury, had made the difficult decision to retire.

"I had a couple of offers to carry on - one from a Premier League team and another from a team who had just been promoted to the Premier League - but I had a foot injury and by the time I'd recovered from that people had already moved on," he said.

"To say that I am not going to play professional football again is difficult because I've had a long time at the top and I've put in a lot of work and it's taken a lot of dedication."

Paying tribute to Campbell on Twitter, his former Arsenal team-mate Patrick Vieira tweeted that "it was a pleasure to play with him. What a player. A fantastic career and a great man".

Campbell made 646 appearances for five different clubs between 1992 and 2011, as well as playing 73 times for England and taking part in three World Cups and three European Championships.

He made his debut as an 18-year-old for Tottenham Hotspur, scoring after coming on as a substitute, and went onto become the club's captain.

In 2001, he moved on a free transfer to Arsenal, a move that provoked anger among Spurs fans.

At the Gunners, he won two league titles and two FA Cups, and scored in the 2006 Champions League final, which Arsenal lost to Barcelona.

However, after one appearance, he left the club by mutual consent, returning to Arsenal to maintain his fitness before re-signing for his former club for the remainder of the 2009-10 season.

He went on to take part in his final season in football at Newcastle United, playing his last professional game in March 2011.