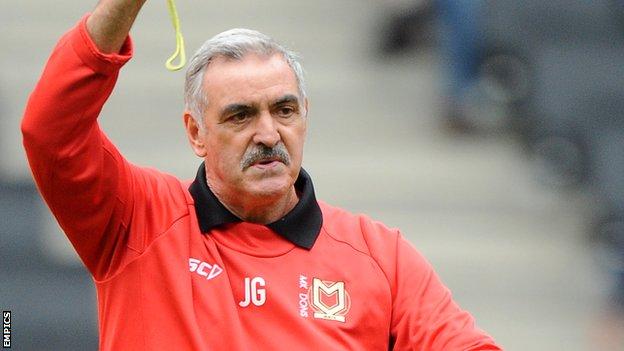 MK Dons assistant manager John Gorman has announced he will retire from football at the end of the season.

The former Tottenham and Carlisle defender, 62, will bring to an end a 44-year career after the Dons conclude their League One play-off campaign.

He was Glenn Hoddle's assistant at Swindon, Spurs and Southampton and with England between 1996 and 1999.

"The decision is very difficult when the team is doing so well," he told BBC Three Counties Radio.

"I told the manager and the chairman of my feelings three months ago.

"I've had one or two health issues which restrict what I can do on the training ground.

"I've enjoyed a long, long time in the game but sometimes you have to realise the decision needs to be made, so I did it for the benefit of everybody."

Gorman also had spells in charge of the Robins, Wycombe Wanderers and Northampton Town.

The Scot was named Karl Robinson's number two at MK Dons in May 2010 and the pair are the longest-serving management duo at Stadium MK.