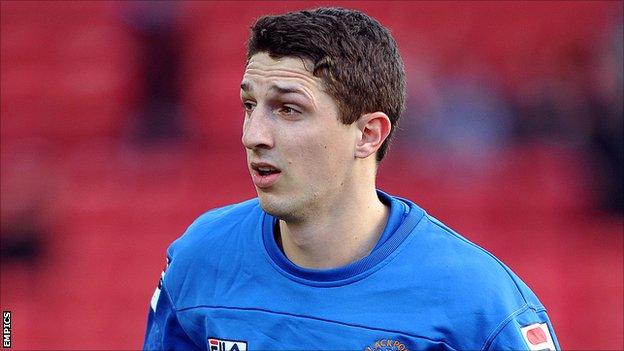 The Northern Ireland defender, 23, has been given the all-clear to train after visiting a heart specialist, but will continue to be monitored.

Manager Ian Holloway told BBC Radio Lancashire: "He's been having a racing heart over the past couple of weeks.

"We instantly got him checked and he's got an enlarged heart."

Holloway continued: "For footballers and professional athletes, that's quite a common thing.

"It's very similar to a panic attack where your heart is racing. Until we find out exactly what that is, we can't use him, but the specialist is more than happy for him to train."

Striker Nouha Dicko, who is currently on loan from Wigan, suffered from a similar problem recently.

The case of Bolton midfielder Fabrice Muamba, who collapsed during a match at Tottenham in March after suffering a cardiac arrest on the pitch, has heightened calls for players to be screened for heart problems more regularly.

Muamba, 24, spent a month in hospital but has made a speedy recovery and will attend Wanderers' Premier League match against Spurs at the Reebok Stadium on Wednesday.

Last month in Italy, 25-year-old after collapsing during a Serie B game against Pescara.

Cathcart is in his second season with Blackpool, having joined from Manchester United in August 2010 for an undisclosed fee.

The former Plymouth Argyle loanee has played 33 times this season, although he has not featured for the first team since the 3-1 defeat at champions Reading on 24 March.