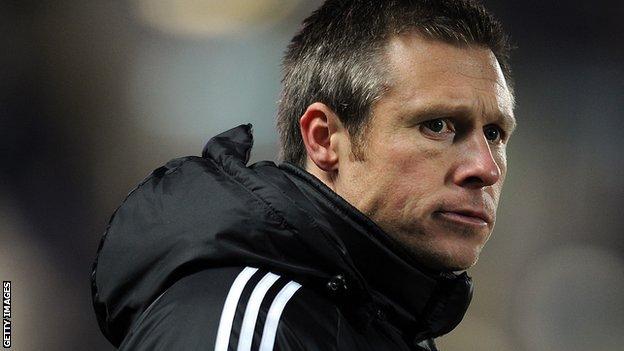 The Tigers confirmed that Barmby had been suspended last week over comments he made in the media about the club's finances prior to being dismissed.

Barmby said in a statement released on his behalf by the League Managers' Association that he intended to appeal.

"I am obviously hugely disappointed to have been dismissed. I maintain that my sacking was entirely without justification," said Barmby.

"In everything I have done for the club I have always acted in the best interests of Hull City.

"As the matter is subject to an appeal, and, if necessary legal proceedings, it would not be appropriate for me to make any further comment at this stage, despite the fact that the club has seen fit to go public with its version of events."

Barmby, 38, won 13 of his 33 games during his tenure and his sacking follows that of head of football operations Adam Pearson last week.

"I really feel for Nick because he sacrificed his playing career for a job I'm not sure he totally wanted at the time.

"The fans appreciated what he said because they felt he was being honest. Ok, the owners didn't like it but this could have been dealt with in-house. I just feel the whole thing was very avoidable.

"I like the Allams but they've scored an own goal here. I haven't spoken to a single Hull fan who is backing this decision.

"He was a good young manager with quality young players. Now he's gone I think you'll find a lot of those players will leave too."

The former England international, who retired from playing shortly before taking over as manager in January, made 180 league appearances for Hull after joining his hometown club from Leeds in 2004.

He initially took over in a caretaker capacity following Nigel Pearson's return to Leicester City in November.

The Tigers, who were relegated from the top flight in 2010, finished eighth in the Championship this season, five points off the play-offs.

But vice chairman Ehab Allam confirmed it was comments Barmby made to the media, rather than results on the pitch, which had cost him his job.

"The club can confirm that following a brief period of suspension Nick Barmby has today been dismissed as first-team manager," Allam told the club website.

"The reason for the dismissal relates to comments made in recent interviews.

"The comments concerned were wholly misleading and implied that the board had not made funds available to Nick to strengthen the first-team squad during the January transfer window. This is completely untrue.

"The board consider the comments made by Nick unjustifiably cast public doubt on the honesty and integrity of the board and its members."

Former Nottingham Forest boss Billy Davies has already been linked with the vacancy, while ex-Tigers boss Phil Brown admitted on BBC Late Kick Off Yorkshire and Lincolnshire that he "would love" to go back to the club he led into the Premier League four years ago.