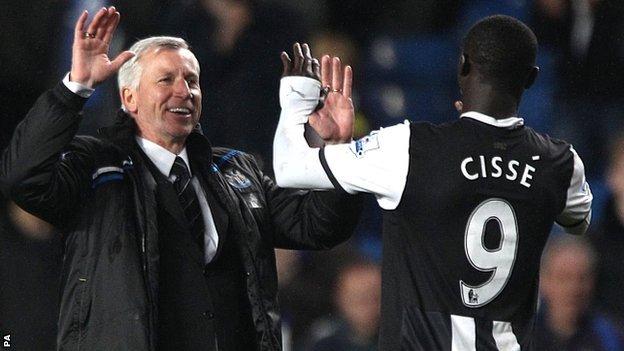 Newcastle United manager Alan Pardew savoured the "astonishing" goal from Papiss Cisse that helped to keep them in contention for a place in the Premier League's top four after a 2-0 win at Chelsea.

The Senegal striker took his tally to 13 goals in 12 games for Newcastle with both goals to keep them level on points with fourth-placed Spurs in the battle for a place in next season's Champions League ahead of Sunday's visit of leaders Manchester City to Tyneside.

Cisse's first-half volley was spectacular - but he topped that with a goal of the season contender in stoppage time with a swerving, angled strike with the outside of his right foot that even brought a smile from admiring Chelsea substitute Didier Drogba.

Pardew said: "It was just an astonishing goal, something really special. I thought we were going to get home with that 1-0 lead but Papiss has taken a chance. You could see he meant it and he caught it absolutely true.

"I'm looking forward to seeing the highlights video of our season because there will be some great goals on there."

Drogba was in close proximity to Pardew and the Newcastle boss revealed: "I said 'come on Didier, you have to admire that' and he just laughed.

And he now has his sights set firmly on securing a place in the top four that would keep alive Newcastle's ambition of qualifying for next season's Champions League.

Pardew said: "We have got ourselves in a great position and some of our players were phenomenal. We are totally focused on what we are trying to achieve. It is not often you get the chance to break into the top four in this country so we are going to give it everything.

"We are looking forward to Manchester City coming to Newcastle on Sunday. It's going to be a special day for us and our club. The team going for the title is playing a team trying to get into the top four and if somebody had told you that before the start of the season you wouldn't have believed them."