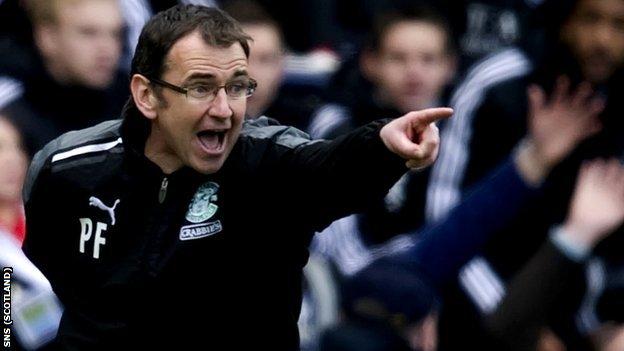 The Easter Road club defeated the Dons in the semi-final by the same scoreline to reach the Hampden showcase.

"If it means we stay up then it'll be a much bigger win," he said.

"I thought we played better tonight than we did in the semi-final to be honest."

If Hibs avoid defeat in their next match - against bottom club Dunfermline - then they are assured of SPL football next season.

"I don't know if it's a comfort zone, but what it means is that if we win on Monday, we stay up and that's the important thing," said Fenlon.

"It's not done yet, the important thing is that we don't get carried away. Dunfermline are going to come and throw everything at us, it's a big game now for them as well."

However, Fenlon admitted that his side left him in mental turmoil on the touchline as they clung on to their lead under pressure from the home team.

"At the end of the game we were under pressure but we should have been out of sight at that stage, we missed a fair few chances tonight," Fenlon said.

"When it gets to this stage of the season it is a little bit edgy."

The Hibs boss was also pleased to get talismanic striker Garry O'Connor back after illness.

"He did well to last as long as he did as he's been fairly ill for the past three or four days, so he's only had one training session under his belt in about six days," added the manager.