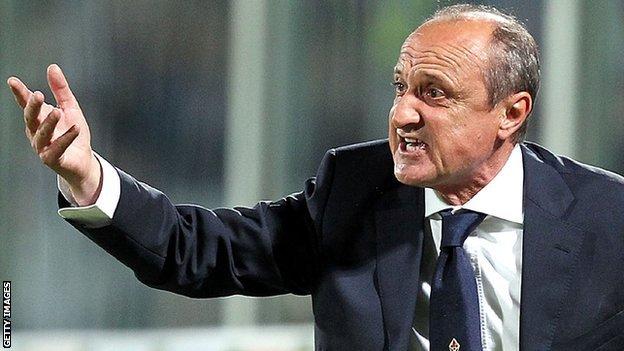 Fiorentina boss Delio Rossi has been sacked for physically attacking his own player in a spat over a substitution.

Rossi then clambered into the dug-out and aimed a punch at the forward.

Club president Andrea Della Valle dismissed Rossi after the match. Team manager Vincenzo Guerini will replace Rossi until the end of the season.

"I had to make this decision. No provocation justifies the reaction," said Della Vale.

"I'm sorry for the coach who is a good person and does not deserve it, but he committed a serious act.

"In a few seconds months of stress came out. I am sorry because the coach has never committed acts of this kind."

Fiorentina have also started internal disciplinary proceedings against Ljajic, while the Italian league have handed Rossi a three-month ban and fined the club £12,000 (15,000 euros) after supporters "ethnically insulted" the Serbian striker as he came off the pitch.

The incident came shortly before the half-hour mark after Fiorentina had slipped 2-0 down against the visitors, who are second bottom of Serie A.

The dramatic dismissal marks the end of Rossi's six-month reign at Fiorentina.

He replaced the fired Sinisa Mihajlovic in November but has struggled to turn the Viola's season around.

The Tuscan club, who scored two second-half goals to draw the game, are 15th, six points above the drop zone.

They travel to third-bottom Lecce on Saturday for their penultimate game of the season, where a point would secure safety from relegation to Serie B.

Manchester United had an agreement to sign Ljajic, now 20, from Partizan Belgrade, but opted not to exercise the option in December 2009 citing expected difficulties securing a work permit.

Rossi's departure is the 19th coaching change in the Italian top-flight this season, beating the previous record of 15 changes in 1951-52.