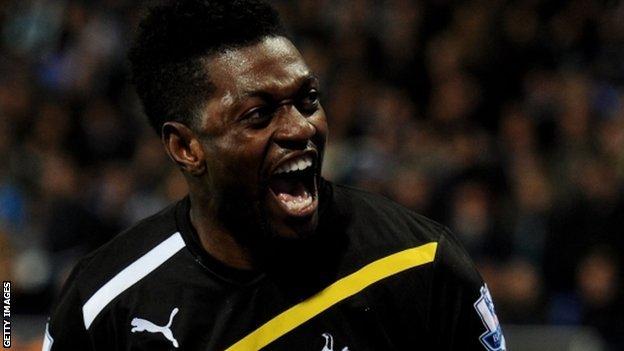 The Togolese striker, 28, scored twice in Wednesday's 4-1 win at Bolton to maintain Spurs's chances of reaching the Champions League next season.

The money they earn from qualifying for Europe's elite competition could help to sign Adebayor from Manchester City.

"Of course I would [sign him]. I love Adebayor. He's a real character and a good player," said Redknapp.

"We'll see what the summer holds. I've not spoken to the chairman yet, Daniel Levy has been busy, but when he gets back we'll sit down and have a chat, but Adebayor has done very well for us."

Spurs are fourth in the Premier League, ahead of Newcastle on goal difference and a point behind third-placed Arsenal with two games left.

Adebayor has scored 16 goals this season to play a crucial part in Tottenham's push for the top four.

He moved to White Hart Lane on loan last summer after a fall-out with Manchester City boss Roberto Mancini, having spent the second half of the previous season on loan at Spanish giants Real Madrid.

"But there are lots of clubs interested in him. We've not spoken to the club, he's just a player I've watched along with loads of other players this year."