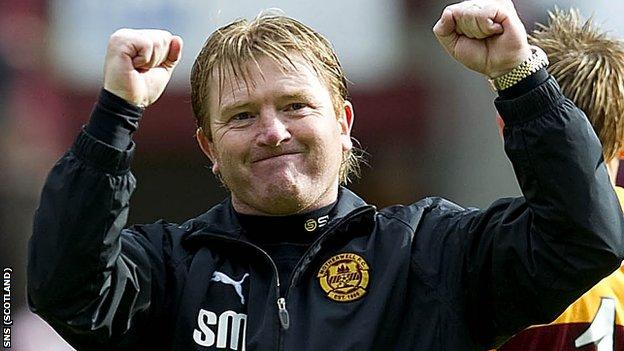 Manager Stuart McCall is thrilled after Motherwell clinched a Champions League place for the first time.

Dundee United's loss to Rangers means the Steelmen will finish third in the Scottish Premier League.

And second-placed Rangers are certain to miss out on Europe due to their ongoing financial problems.

"The fans can start getting the passports out and looking ahead to what might be some great times ahead," McCall told BBC Radio Scotland.

"I got my first text at quarter to six this morning and the players will be buzzing."

The Fir Park side have been in the top three places from the start of the season and have already surpassed their record tally of points in the SPL.

"Our consistency levels have been great," added former Scotland midfielder McCall. "The players have been outstanding and we've been fortunate with injuries.

"We also had good continuity since we managed to keep most of the players from last season, which will be difficult to do next season.

"We've had a dire set of results against the Old Firm; seven games, seven defeats, but from the other 29 games we've only lost four.

"So, to be best of the rest is a great achievement and to get 61 points, which is a SPL record for Motherwell, is a real credit to the squad."

Once Rangers' non-participation is officially confirmed, Motherwell will go into the non-champions section of the draw in the third qualifying round.

They will be unseeded, and while too many factors are still undecided, could face teams of the calibre of Dinamo Kiev or Braga.

Motherwell's first foray into Europe came in the 1991-92 Cup Winners' Cup and their most high-profile tie was against Borussia Dortmund in 1994, when they lost 3-0 on aggregate to the Germans in the Uefa Cup.

Two seasons ago, the Lanarkshire side played three qualifying matches in the Europa League, eventually losing out to Danish outfit Odense.

Having scored the winning goal against Hearts on Tuesday, striker Michael Higdon told the club website: "It would be Motherwell fans' wildest dreams getting to the Champions League.

"Over the course of the year we have thoroughly deserved it. We have been third all year. If you ask every manager in the SPL, they would say we deserved it.

"I'm just delighted for the fans and the lads. We have worked so hard all year. I'm just made up."