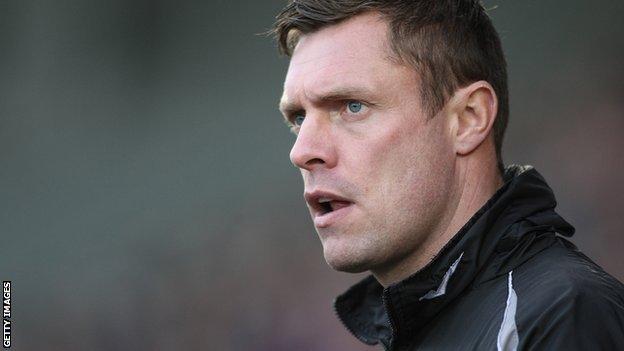 Port Vale coach Geoff Horsfield is to quit the game at the end of the season to run his own building business.

The 38-year-old former Halifax Town, Fulham, Birmingham City and West Bromwich Albion striker was brought to Vale Park by Micky Adams in his first stint in charge in July 2009.

"It's a good job opportunity for me," he told BBC Stoke & Staffordshire.

"I've always been interested in the construction side. It's the chance to start a business and make it grow."

The big, bustling Horsfield made his name in the 1997-98 season, scoring 30 goals in 40 games to help Halifax into the Football League, while still working part-time laying bricks.

That earned him a move to Fulham, the first big money move move in a career that eventually saw him clock up £7m in price tags.

But, although he scored in both derby games in one season for Birmingham City against Aston Villa in 2002-03, his most famous strike came a season later when he scored the goal that kept Albion in the Premier League to complete the Baggies' 'Great Escape'.

Horsfield joined Vale as player/assistant manager three summers ago just months after being given the all-clear following treatment for testicular cancer.

As a footballer, you're always selfish. And the gaffer understands I've got to look after me and my family

He then enjoyed a happy first season working alongside fellow Yorkshireman Micky Adams, his friend and former Fulham team-mate.

Adams then headed off his ill-fated stay with Sheffield United, to be replaced by Jim Gannon, with whom Horsfield did not see eye to eye.

And, although Adams was to return to the club following Gannon's 74-day stay, Horsfield admits that was the moment when he first thought about returning to life outside professional football.

And Vale's well-chronicled financial struggles, although close to being sorted by prospective new owners, made up his mind.

"When we went into administration and the gaffer left, then we had a new manager who I didn't really get on with and I thought then that there might not be a future in the game for me.

"I've wanted to tell the gaffer about this for the last seven or eight days," adds the man widely as 'The Horse'.

"He's not just my manager, he's a friend. He was disappointed as I'm a bubbly character around the place.

"People say I'm loud but I'm always trying to get the lads going and have a bit of banter.

"Some of the players are wondering why I've gone but, as a footballer, you're always selfish.

"And the gaffer understands I've got to look after me and my family.

"My only disappointment is that I never got to play as many games as I'd have liked for Vale. I thought I could play on for another season or two.

"But I'll go with happy memories and I'll always look for Vale's result."