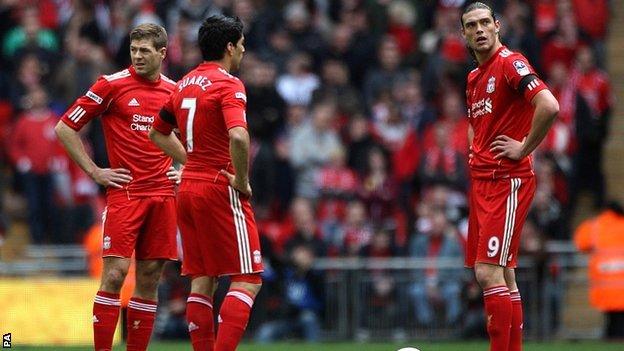 The pair were signed in January 2011, with Fernando Torres sold for £50m.

But Liverpool have struggled to convert chances this season and are eighth in the Premier League.

"They spent a lot of money last season," Molby said. "But with all the chances they have wasted, they have to find somebody to score more goals."

ALAN SHEARER ON A TALE OF FOUR STRIKERS AT WEMBLEY

On Didier Drogba, Fernando Torres, Luis Suarez and Andy Carroll: "At times, it has been a campaign that they will all have wanted to forget, but I think one of them will score the goal that will win the game, and the cup."

Who will be the Wembley match-winner?

but Molby told BBC Sport the team need better delivery from wide areas, even though they signed winger Stewart Downing for a reported £20m last summer.

Molby, who made 292 appearances in a 12-year spell at Anfield, said: "Liverpool are still looking at similar areas as they did last season.

"They need wide men who can bring us real quality, a real playmaker in midfield and of course, importantly, and depending on how much money is available, a goalscorer."

Kenny Dalglish's side have already won the Carling Cup this season and could add to that in Saturday's FA Cup final against Chelsea.

Yet, with two league games left, they could finish out of the top eight for the first time since 1954.

Suarez is Liverpool's top scorer this season with 17 goals, but he is the only player to reach double figures.

Liverpool have won only five of 18 home league games this term and have hit the woodwork on more occasions than any other Premier League team.

But he said missing out on the Champions League would affect the calibre of players the club could sign.

"There have been some really disappointing performances in the Premier League and you can't overlook that," Molby said.

"If you become a cup team and you finish seventh, eighth or ninth in the Premier League, the group of players you are going to attract, as great as your history is, is limited.

"Every player worth his salt wants to play in the Champions League. As much as they say the cups are great, Liverpool have to get back there."