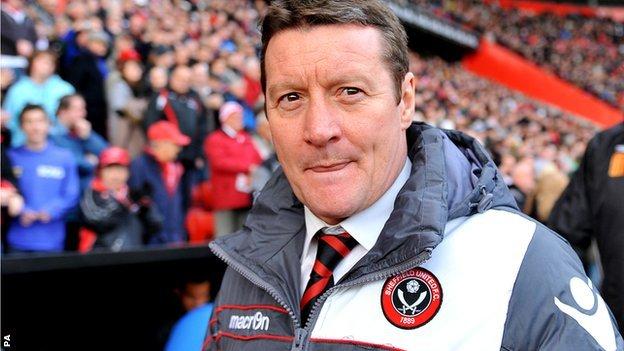 Sheffield United boss Danny Wilson has admitted defeat in the race for automatic promotion from League One.

The Blades are one point behind second-placed Sheffield Wednesday but with both teams facing already-relegated opposition on the final day, Wilson does not see the Owls slipping up.

"I expect us to be in the play-offs," he told BBC Radio Sheffield.

"We've prepared for it and from my perspective if we have to go up that way, then so be it."

He added: "We've been ready for the play-offs for three months. We've had hotels booked and training facilities put on hold, just in case.

"We've kept it quiet because that's what you have to do. You don't want anything to take you by surprise."

United had looked set to clinch second place behind Charlton but one point from their last two matches has seen them overhauled by their fierce local rivals.

Wilson is confident that his side have the mental capacity to bounce back from the disappointment of having to go up through the play-offs, should that be the case.

"I'm not worried about it, we've got a great chance in front of us yet," he continued.

"There'll be no psychological dip. I know our record in the play-offs in the past hasn't been the best, but that counts for nothing.

"If you let it get to you then you may as well not bother at all."

The Blades travel to Exeter on Saturday and can only go up automatically if they better the result of Wednesday, who host Wycombe and are on a 13-match unbeaten run.