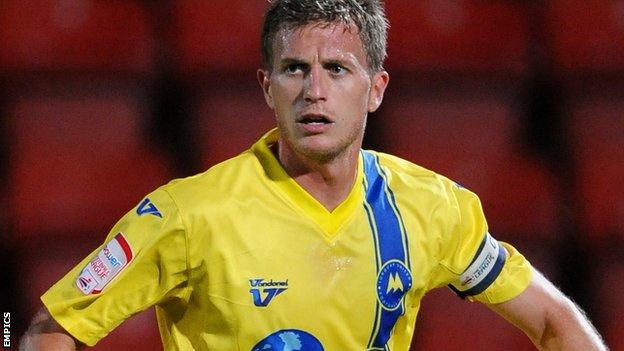 Torquay United captain Lee Mansell says his side must keep their nerves in check if they are to beat Hereford and give themselves a chance of automatic promotion out of League Two.

The Gulls must hope Crawley get a worse result at Accrington then they do at Edgar Street to go up.

But Hereford must avoid relegation to the Blue Square Bet Premier.

"Nerves will play a big part of it from both sides, they've got a lot to play for and so have we," Mansell said.

"The side that settles quickest will win the game," he added to BBC Sport.

Mansell was part of the side that were relegated to the Conference in 2007 and then lost in a play-off semi-final to Devon rivals Exeter City a year later.

The following season he helped the Gulls return to the Football League with a play-off win over Cambridge United at Wembley, and led them as they went down to Stevenage in the League Two play-off final at Old Trafford a year ago.

And he says his biggest role now is to try and get his players ready for the Hereford match after a crushing last-minute equaliser by Crewe saw them drop below Crawley in the table.

"They were down on Saturday and it's gutting to have a last minute equaliser go against you when you've dominated the game.

"It could be worse, we could be in Hereford's position. I've been there and I'd much rather be fighting at this end of the table then down there."

And Mansell hopes that, for one year at least, he does not fulfil his childhood dream - at least not just yet

"As a kid you dream of scoring a winner at Wembley, but hopefully we don't go into the play-offs and that won't be the case.

"To be able to achieve an automatic promotion would be fantastic for this football club.

"As a footballer you can look back on that and think to yourself that it was a great day in your career and one you will always hold in good stead."