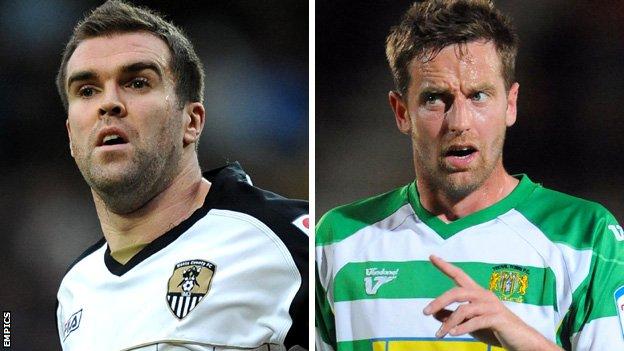 Loan strikers Ben Burgess and Steve MacLean have been given permission to play in Cheltenham Town's play-off campaign by their parent clubs.

MacLean, 29, joined the Robins from Yeovil in March and has made two appearances so far.

Notts County forward Burgess, 30, arrived on the same day and has scored twice in seven games.

Meanwhile, the Football Association has released Luke Garbutt from England U19 duty to play in the semi-final.

Robins assistant manager Neil Howarth told BBC Gloucestershire: "When the deadline came in March, this is why we brought players in so we weren't short come April and May."

Cheltenham secured their play-off place last weekend with their 3-1 win over Bradford, and Howarth says they will plan on resting a number of first-team players for their final game with Plymouth.

"Oxford, Crewe, Southend, Crawley and Torquay all have big games where they have to go flat out. We have the luxury of being able to rest people to freshen them up for the play-offs," he added.

"But we're certainly not resting players with a view to having a weakened team. We've got a good squad of players.