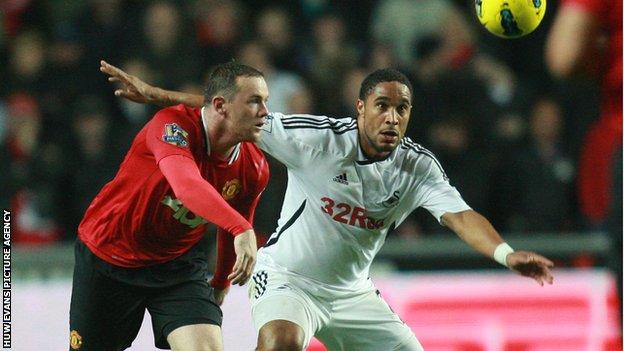 The Swans face the title contenders on Sunday in the penultimate game of their first season in the Premier League.

"Swansea are capable of going to Man United and winning. That's how much I rate this young side," said Hartson.

Although Hartson says Mancini's comments were disrespectful to Swansea, he can understand the Italian's sentiments with the title race going down to the wire.

"It's all mind games and it's working because it's getting a reaction from us," added Hartson.

"I'm sure Martin [O'Neill, Sunderland manager] would really have something to say about it as well. Obviously Manchester United have to go to Sunderland.

"And having worked with Martin at Celtic for five years, I know he might just pin that up on the dressing room wall.

"But listen, it's mind games and that's the way it is."

Swansea have enjoyed a memorable debut season in the Premier League and finally confirmed survival after last weekend's 4-4 home draw against Wolves.

Hartson has not been surprised by Swansea's progress this season, but says maintaining their Premier League status will be a challenge next season.

And the former Arsenal and Celtic player is hopeful Swansea boss Brendan Rodgers will stay on with the club beyond this season.

"I think next season will be the real test because the other teams will have had a surprise element going to Swansea this year.

[They've] beaten Man City, beaten Arsenal, drew with Spurs [and were] three minutes away from beating Chelsea. They have shocked a lot of teams.

"The best signing they have made in the last 10 years was their manager Brendan Rodgers.

"He is committed to the cause. I'm almost sure he will stay with the club.

"It is inevitable he will move on in the future, but I think Brendan is committed to Swansea, committed to the work he is doing there with the young players."