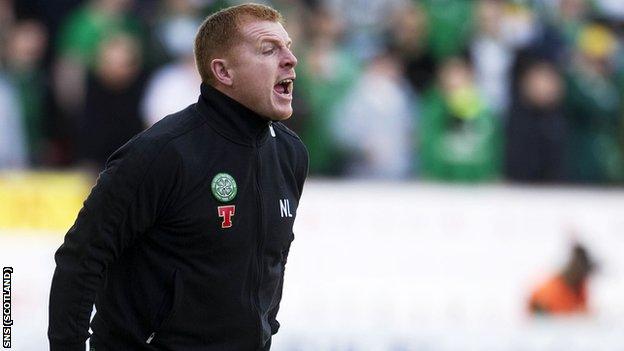 Celtic manager Neil Lennon has been given a six-match touchline ban - half of which is suspended - for his Scottish Cup semi-final conduct.

Lennon ran on to the park to confront referee Euan Norris after the 2-1 loss to Hearts at Hampden.

The punishment means the 40-year-old will watch the three remaining matches of the season from the stands.

The remainder of the penalty will be suspended until the end of the next campaign.

But Lennon, who has just served a two-match ban for criticism of League Cup final referee Willie Collum, received no punishment for a further two rule breaches relating to comments made on Twitter hours after defeat against Hearts.

The SFA ruling read: "The judicial panel found Mr Lennon in breach but imposed no further sanction based on the fact he was not responsible for the posting of the actual tweet."

Earlier this week, Lennon said that he planned to apologise to Norris for his behaviour.

He also indicated that he would not appeal against the penalty imposed on him by the Scottish FA's judicial panel.

Lennon told BBC Scotland after his team's 1-0 win over St Johnstone on Thursday: "I got a fair hearing. I expected to be punished and I am very contrite about things.

"The judicial panel was probably as fair as it could be. I wrote an apology to the referee.

"I don't want to be going to those things. It's my own fault and I accept the punishment that's come my way."