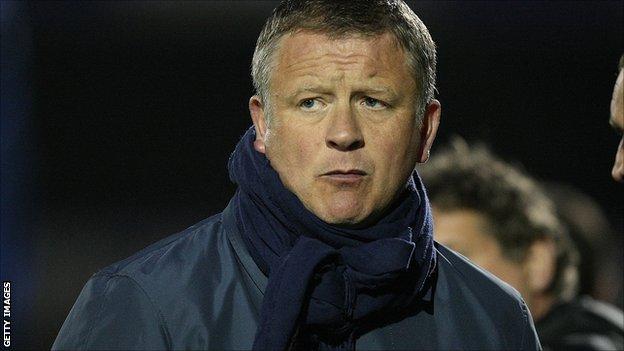 Oxford boss Chris Wilder feels his side can still make the League Two play-offs and insists all the pressure is on higher-placed Crewe.

The U's are three points behind Crewe, who occupy the last play-off place, with one game left.

Wilder's side travel to Port Vale on Saturday, while Crewe host Aldershot.

"It's a difficult game for Crewe. There is pressure on them and Aldershot at home is certainly not a given," Wilder told BBC Radio Oxford.

Wilder admits that recent results have not been good enough with his side without a win in six games.

But he has urged them to win their last game and do everything they can to qualify for the play-offs.

"We are disappointed by our results over the past month," added Wilder.

"We've not been good enough in terms of pushing into the play-offs and we all realise that and we all accept that.

"It's out of our hands now but all the staff here have been in the type of situation before where results go for you and it's about time a result went for us.

"Going the amount of time we have gone [without winning] is not good enough for this club and we'll be going all out to win on Saturday.

"We've all been in it and the last thing we want is to be sat in the dressing room at five o'clock on Saturday having not won and hearing the result down the road has gone our way."

The England Under-19 international keeper stepped in at the last minute after Wayne Brown was injured in training on Friday, but was unable to prevent a 2-0 defeat.

Ryan Clarke remains sidelined with a rib injury while Wayne Brown will have an operation today on a knee problem.

"With such a pressure game against Port Vale on Saturday we're looking to bring in someone with maybe a bit more experience and we have been working hard to make that happen," added Wilder.