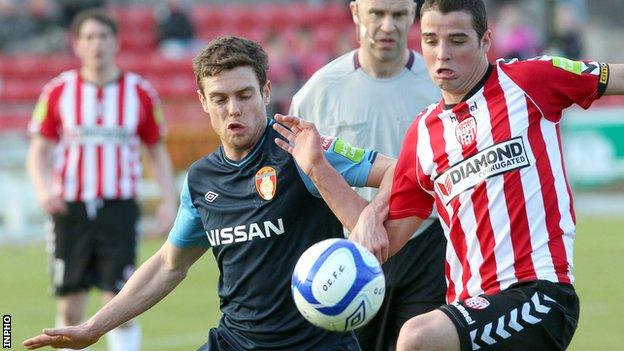 Derry City's recent slide continued as they were outplayed by impressive St Patrick's Athletic in the Airtricity League clash at the Brandywell.

Declan Devine's side understrength Derry were handed a footballing lesson.

Doherty saved brilliantly from Christy Fagan after the break but the Derry keeper was badly at fault as he allowed Sean O'Connor's shot to beat him on 64.

Derry started minus the influential Patrick McEleney who was suspended following his sending off against Shamrock Rovers last weekend while Kevin Deery and Mark Farren also joined an already lengthy injury list as they missed the game.

Forrester had a great early chance for Pat's but Doherty made a smart save.

As Derry attempted to match their opponents, David McDaid tested keeper Brendan Clarke with a snapshot but Pat's continued to look the more dangerous side.

The visitors did take the lead on the stroke of half-time as Meenan looped a header over the stranded Doherty.

Fagan should have extended Pat's lead four minutes after half-time when clean through but Doherty spread himself well to save the weak shot from pointblank range.

Doherty did brilliantly again to stop a John Russell shot a minute later as Pat's, with Greg Bolger superb in midfield, began to take complete control.

However, the Derry keeper won't fondly remember Pat's second goal on 64 minutes as he allowed O'Connor's tame shot to evade his grasp and bounce into the net.

Derry were scarely able to produce any late huff and puff as Pat's clinched their first win over the Candystripes in 10 attempts.