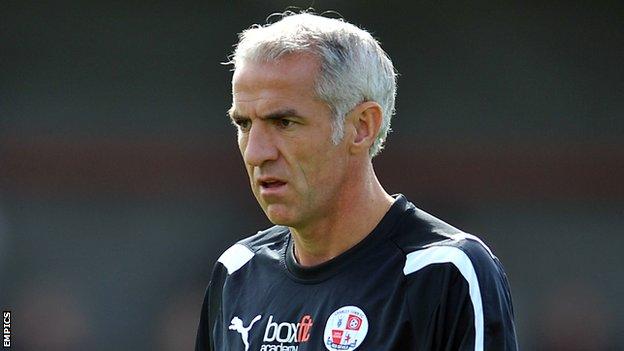 The Reds know a win over Accrington Stanley on Saturday will be good enough to seal third place in League Two.

He told BBC Sussex: "We let a lot of people down last Saturday and we've been given another opportunity. Every player knows what's at stake.

"They've worked hard to get into this position and it's time to deliver."

Crawley looked near certainties to seal their place in League One for next season last weekend when they hosted relegation threatened Hereford United.

But the Bulls had not read the script and produced a stunning 3-0 win at Broadfield.

He added: "Last week we let our support down, we didn't give them anything to cheer for and it's a chance to retrieve it.

"To have back-to-back promotions would be an amazing achievement. We know have to do our jobs, be professional, and be positive."

Despite winning promotion to the Football League last season and having successful FA Cup runs in the last two seasons, Crawley chief executive Alan Williams believes promotion to League One will propel the West Sussex side to the next level.

He said: "This is the biggest game in our history. Not in terms of the people there, but as far as the football club is concerned.

"We put Crawley on the map last year, the town is behind us and we've grown our fan base.

"With [promotion] comes a lot of additional funding and will make it easier to get sponsorship. All those bigger numbers make for a better team which give you a chance to go yet again.

"We want to get it done with and move on.

"The preparation is good and the guys seem ready. Hopefully we'll all be singing on Saturday night."