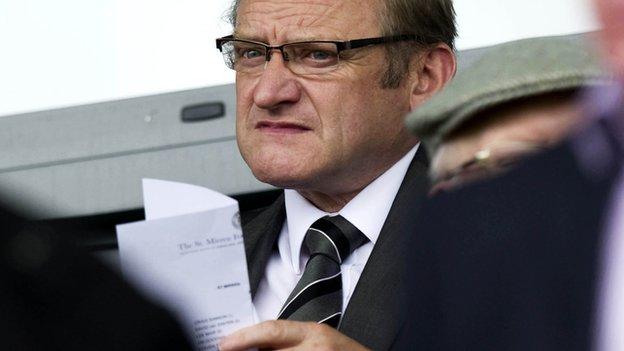 St Mirren have voted director Ken McGeoch off the board in his absence at an extraordinary meeting.

The club were unhappy at McGeoch's use of Rangers' company secretary during his failed takeover bid for the Buddies.

"In a vote by shareholders an overwhelming majority voted to remove Mr McGeoch from his position as a club director," the club said.

McGeoch holds just under 10% of the club's shareholding.

He insisted there was no conflict of interest and resisted calls for him to resign ahead of the EGM.

It followed a meeting in the St Mirren boardroom with lawyer Gary Withey, then of London-based firm Collyer Bristow and also Rangers' company secretary, over his plans for a takeover deal.

McGeogh insisted he had done nothing wrong, adding that it had been "completely transparent" and an "above-the-table deal".

Withey, who helped Craig Whyte complete his Rangers takeover, left Collyer Bristow shortly after the Ibrox club went into administration on 14 February and McGeoch soon ended his partnership with the law firm.

In a statement on Thursday, the club said: "At this evening's extraordinary general meeting at St Mirren Park Mr Ken McGeoch was voted off the board of St Mirren Football Club."