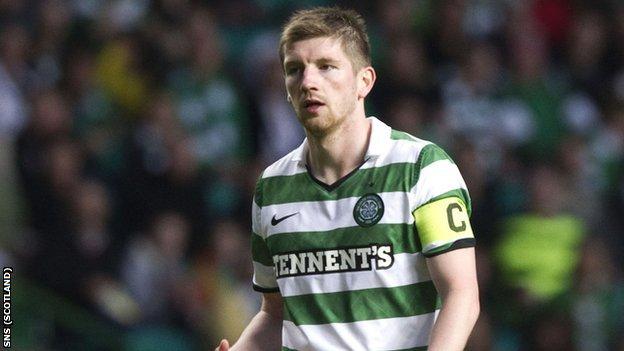 Celtic defender Mark Wilson will almost certainly be leaving the club at the end of the season, bringing to an end his six-and-a-half year stint there.

Wilson joined his boyhood favourites from Dundee United in January 2006.

"He's going to have to move on. We have made provision for next season," said manager Neil Lennon, who made Wilson captain in the win over St Johnstone.

"It will probably be his last time playing at Celtic Park. He has been a tremendous servant to the club."

Lennon and Wilson played together when Wilson made the switch from Tannadice and the manager said the club would be "more than happy to help" the Scot find a new club.

"He wants to continue his career," added Lennon of the 27-year-old Scot, who made his first top-team appearance since 29 October.

"Unfortunately for him he has been curtailed by injury this season.

"He was magnificent for us last year. He had that knee surgery in the first half of the season and it held him back this year."

Celtic have Adam Matthews, Cha Du-Ri and Mikael Lustig for Wilson's favoured right-back berth and it is unlikely that he will be the only player on his way out of the club this summer.

"We are going to trim the squad. It's clogged up a little bit and we want to make provisions for new players coming in," added Lennon.

"We've identified a few players [to sign] but whether we can get over the line with them or not is another thing.

"We have to manage the debt here. We have to be prudent with our signings.

"I don't think there will be a marquee signing, but if there is I'll be delighted.

"In terms of the balance of the squad, I don't think we need one because they are young and hungry and vibrant. I like what we've got within the ranks at the minute."

The Celtic manager made seven changes to the team that beat Rangers at the weekend for the match against St Johnstone, which was won thanks to an Anthony Stokes goal.

"We made a lot of changes but it was good to give the boys a run-out," said Lennon.

"I was really pleased with my back four and with Lukasz.