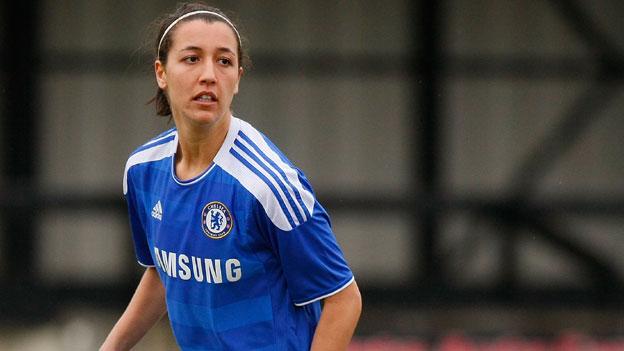 The Blues had never before reached the final but took a first-half lead through Helen Bleazard's powerful shot.

And Susi headed in with five minutes remaining to secure a place in the final against Birmingham.

Quantrill was playing only because of injury to regular goalkeeper Carly Telford, who was hurt during Blues' 3-1 Super League defeat by the Gunners last week.

But the ex-Norwich player - who, like Susi, was once on Arsenal's books - was in impressive form to deny Arsenal reaching a 14th final in 20 years.

They took the lead in the 22nd minute, Bleazard striking home a tremendous shot to stun the Gunners.

But the Cup holders recovered quickly and soon threatened an equaliser.

Left winger Rachel Yankey's long-range effort landed on the roof of the net and then midfielder Jordan Nobbs had a shot stopped by Quantrill.

Shortly before half-time the Blues keeper pulled off another good save, pushing a Kim Little drive on to the crossbar.

As Arsenal continued to press after the break Yankey had a shot cleared off the line by defender Sophie Perry.

Just before the hour Quantrill produced a superb save to deny Yankey and then had to react smartly again to keep out a deflected Alex Scott shot.

The Gunners kept up the pressure but they were finally beaten when Susi headed home Chelsea's decisive second goal.

Quantrill confirmed her Player of the Match status with a great stoppage time save from Scott.

Chelsea will meet Birmingham City on 26 May after depriving Arsenal of an eighth straight final.