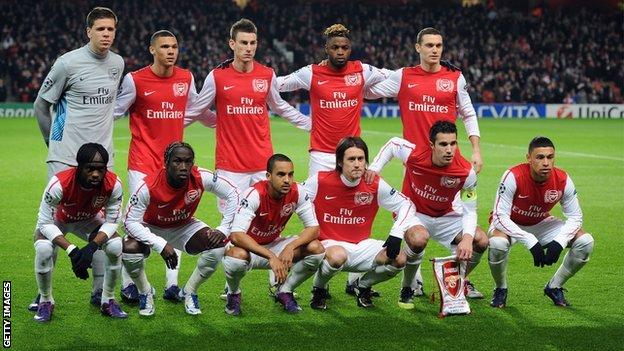 English Premier League club Arsenal will travel to Nigeria for a pre-season match in Abuja on 5 August.

According to the organisers, DanJan Sports, Arsenal's opposition are likely to be a leading African national team.

It will be the first time the Gunners have played in Nigeria.

"We are working on the opposition and once that is finalised we will announce it to the public in conjunction with the London club," David Omigie of DanJan Sports said.

"Nigeria is the most populous country in Africa, and the club with arguably the biggest fan base in the country is visiting in August."

On their official website Arsenal said: "The club last visited Africa during a tour to South Africa in July 1993, and is returning as a result of the fantastic support which exists for the team, not only in Nigeria, but across the entire continent."

The club traditionally hosts an annual pre-season tournament at the Emirates Stadium, but they opted to postpone the event for a year because of the 2012 London Olympics.

The visit to Nigeria will conclude Arsenal's pre-season tour after playing in both China and Malaysia in July.

In July 2008, DanJan Sports brought two other English clubs, Manchester United and Portsmouth, to the Nigerian capital Abuja for a pre-season friendly.

As well as the match between the two, Portsmouth also played against Nigeria Premier League side Kano Pillars.

But DanJan Sports plan to go a step further this time around.

"We learned a lot from the 2008 tour and this one is going to be bigger," Omigie told BBC Sport.

"Arsene Wenger wanted a detailed plan and information. Facilities and other areas were well covered by the club.

"This is the beginning of big things between the club and the continent of Africa."

The organisers are confident the stadium in Abuja will be able to host the game adding Arsenal are happy with the venue after recent visits.

This despite the Nigeria Football Federation saying Thursday that Abuja will not be hosting the Super Eagles' 2014 World Cup qualifier against Namibia on the opening weekend of June nor its 2013 Africa Cup of Nations qualifier second leg against Rwanda a fortnight later.

According to speculation in the local media Ghana, Zambia, South Africa, Nigeria, Ivory Coast and Egypt are all among the potential opponents for the Gunners.