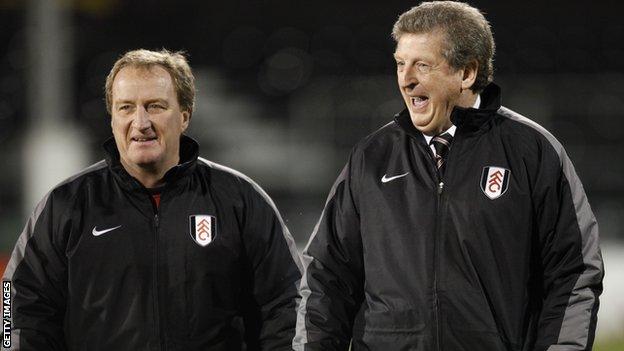 Former Watford boss Lewington, 55, will link up with England after the end of the Premier League season.

Hodgson said: "I'm delighted that Fulham have agreed to Ray joining the England coaching staff for the summer. I know Ray well and enjoyed working with him at Craven Cottage.

"He's a very good coach and the players will I'm sure enjoy working with him."

The new England manager added: "We're currently finalising the rest of the coaching staff but it's great to have Ray confirmed.

In 1986 made player-manager of Fulham, a role he held for four years.

In 1990 stepped down to assistant, before moving to Crystal Palace as coach.

Made coach at Brentford in 1999, before he was promoted to manager the following year.

Lewington appointed reserve team manager at Watford in 2001 by Gianluca Villa, eventually succeeding the Italian in 2002.

After being sacked in 2005, returned to Fulham as reserve team manager. He has since been assistant manager, first team coach and youth development boss.

"I'd like to thank Fulham for agreeing to this."

Lewington's appointment is likely to come as a setback to Stuart Pearce, who has been in caretaker charge of the senior team since Fabio Capello resigned.

The former England defender had been expected to remain in place but after meeting with Hodgson at Wembley on Wednesday, BBC Sport understands it was decided Pearce should focus all his attention on preparing Team GB for the Olympic Games.

Lewington was Hodgson's assistant at Craven Cottage for three years, and was at his side when Fulham reached the 2010 Europa League final.

He is currently head of coaching at the west London club, although much of his time is spent on youth development and managing the reserve team.

Hodgson will not meet his England players until they report for a four-day training camp at the La Cala resort near Marbella, Spain, on 21 May as former boss Capello had decided to give them all a week off after the end of the Premier League season.

His first match in charge will be a friendly against Norway in Oslo on 26 May before his first experience of Wembley when England entertain Belgium on 2 June.

Hodgson has until 29 May to submit his final Euro 2012 squad to Uefa.